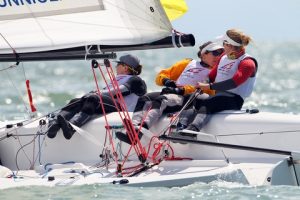 Strong line up for the British team in Cardiff, UK

Tunnicliffe, who is fresh from competing in the spectacular London 2012 Olympics, will swap match racing for multihull action as GAC Pindar battle against the Extreme fleet consisting of nine outstanding teams.

The US sailor has been the “golden girl” of the sailing world since earning her gold in her Olympic debut at the 2008 Beijing Olympic Games. Since then, Tunnicliffe has been named U.S Sailing’s Rolex Yachtswoman of the Year four times, becoming the first woman to earn the award in four consecutive years. She has also received the most prestigious recognition of her sport, the ISAF Rolex World Sailor of the Year twice, in 2009 and 2011.

With GAC Pindar skipper and ISAF World match racing champion Ian Williams competing in St Moritz on the fifth leg of the Alpari World Match Racing tour, it is once again up to Andrew ‘Walshy’ Walsh to take command of the GAC Pindar Ex40 boat. Joining Walsh will be GAC Pindar regulars Mark Bulkeley (Main), Adam Piggot (Trim), Anna Tunnicliffe (Tactician) and another newcomer Rick Peacock (Bow). Peacock is no stranger to high performance sailing, with over 10 years of competing in professional sailing in particular, the highly competitive 49er class.

Speaking ahead of the next exciting Act, Anna Tunnicliffe says, “I’m really excited to be joining GAC Pindar in Cardiff for the Extreme Sailing Series – I’m looking forward to learning from the guys and offering my skills to the team. I can’t wait for the stadium short course sailing and the super, fast-paced action. I’ve watched it over the past couple of seasons and am really pleased to finally be a part of it!”

GAC Pindar skipper Andrew Walsh adds, “We’re excited to welcome Anna and Rick to the GAC crew. After two weeks of being glued to the Olympics, everyone is fired up and looking forward to getting back on the water. The UK leg of the ESS have always been really well supported and Cardiff Bay should be perfect for the supporters to get right up close and personal to all the action.

I am sure the racing will be as intense as always, with all of the teams fighting for the podium and putting on a great show! All of the British sailors will be particularly fired up, sailing in front of our home crowds.”

Act 5 is going to be an action packed event on and off the water, as the Cardiff Harbour Festival will also be in full swing. Former cricket captain and GAC ambassador Michael Vaughan will be making an appearance to try his hand at sailing and there will be a multitude of Olympic athletes and Team Volvo sailors also getting involved in the action.

For more information on GAC Pindar follow us on:

Quality and trust are touchstones of the GAC promise. The Group’s extensive portfolio of integrated shipping, logistics and marine services provide clients from the shipping, transportation and manufacturing industries with competitive solutions to help keep their business moving efficiently and cost-effectively.

GAC is no stranger to the complex demands of sports logistics. It has a strong track record of providing speedy and efficient solutions for sporting events, including premier sailing events.

Established in 1956, GAC has its headquarters in Dubai, and employs over 9, 000 people in more than 300 offices around the world.