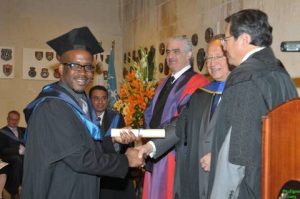 Duane Allen shakes hand with Mr. Efthimos Metropoulos, the former IMO Secretary-General. To the right is Mr. Koji Sekimizu, the present IMO Secretary-General, and to the left is Professor David J. Attard, Director of IMLI and recently appointed Judge of the International Tribunal for the Law of the Sea (ITLOS). Looking on is Mr. Riyaz Hamza, Lecturer at IMLI.

Jamaica has boosted its legislation drafting capacity with the recent return of Mr. Duane Allen from the International Maritime Law Institute (IMLI) in Malta.Mr. Allen is an Assistant Parliamentary Counsel for Jamaica, having been called to the Bar in 2002.

He attended IMLI as a Government nominated candidate out of the Office of the Parliamentary Counsel (OPC) and supported by the Maritime Authority of Jamaica. Mr. Allen’s qualifications served to address the shortage of skills specific to the drafting of maritime legislation. He was awarded a Master of Laws Degree with Distinction in International Maritime Law and also received The Professor Walter Müller Prize for the best legislation drafting project.

Over the past few years Mr. Allen has worked to enhance his understanding of the maritime sector by attending a variety of industry meetings and events, including International Maritime Organization (IMO) seminars on Ballast Water Management and Draft Model Maritime Legislation and the Canada-Jamaica Joint Maritime Security Policy Workshop.

Bertrand Smith, MAJ Director of Legal Affairs, welcomed Mr Allen’s return. “Duane’s successful completion of the course and the work he has done is a welcome addition to the maritime drafting capabilities of Jamaica and will certainly boost our country’s capacity to incorporate international maritime treaties into local legislation, ” he said.-