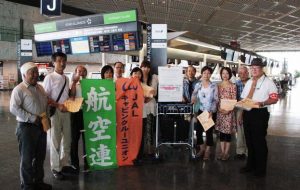 Unionists from maritime and aviation unions have staged actions in major cities around the world to demonstrate support for the 305 Turkish Airlines (THY) workers who were sacked following their involvement in a protest action.

In Amsterdam, Brussels, London, New York and Tokyo, members of the ITF maritime inspectorate and union activists have been participating in the ITF action day on 30 August to back the workers and demand their reinstatement. Represented by the Turkish ITF-affiliated Hava-Is union the workers were dismissed when they took part in protests against legislation to deprive them of the right to strike. Despite a commitment by Turkey’s labour minister to intervene in the dispute, the workers have yet to be reinstated.

During the campaign, Belgium unionists leafleted THY passengers at Zavantem airport, while US activists distributed information material outside the Empire State Building in New York, where THY has an office. Leafleting also took place at Amsterdam and Tokyo airports as well as in the company’s sales office in London and at London’s Heathrow airport.

Swedish unionists, who were attending the congress of the Swedish Transport Workers’ Union this week, passed a resolution pledging their solidarity support for their Turkish colleagues (see video clip below).   ITF general secretary David Cockroft commented: “The 305 won’t go away and nor will we. The management of Turkish Airlines stands accused of a vindictive attack on its own workforce. Unpunished by a government that is its major shareholder, it thinks it has got away with it – but it hasn’t.”

ITF president Paddy Crumlin stated: “Trade unionists are demanding basic justice for the 305, for all THY workers and for everyone in Turkey. The right to strike is a fundamental right, guaranteed by international conventions that Turkey has signed. No government can or will be allowed to remove those foundations when it suits them and then hope to hide unchallenged behind the empty façade of compliance that remains.”

Lloyd’s celebrates over five years of the Lloyd’s Wording Repository on Monday 10 September.