Accolades and an order for Fibrelight Emergency ladders 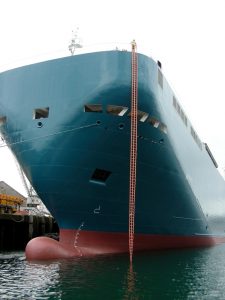 Fibrelight Developments has now received three exciting and tangible accolades for their Fibrelight Emergency Ladder. First, following exacting testing, the Emergency Ladder was granted the all-important SOLAS Certificate of Type Approval SAS S120038 by Lloyd’s Register. Secondly, they then received a certificate from the Safety at Sea Awards 2012 presented during a dinner on HMS Belfast. And, thirdly, a provisional order conditional on obtaining SOLAS Approval was confirmed by MOL LNG.

“SOLAS certification is vital, ” explains Fibrelight director, Pat Hobbs. “SOLAS Chapter III, 31.1.4 and MSC.1/Circ. 1234 now requires all cargo ships with more than 100m from stem or stern to the closest survival craft, to carry remote liferafts and a means of disembarkation enabling descent to the water in a controlled manner. The use of a knotted rope is no longer approved.

“This is where our Fibrelight Emergency Ladder comes into its own. As a natural step-action is involved, this double rung ladder is considerably easier, safer and faster to climb – and especially to descend – than the equivalent single rung ladder.

Could have had a role on Concordia “The Concordia disaster earlier this year, demonstrated how the Fibrelight Emergency Ladder could also form an important safety addition on passenger ships, ” he adds. “In an emergency it would enable passengers to descend from deck to water level. If the vessel was listing, the ladder would provide direct descent to the water on one side, and support for passengers walking down the topside on the other.”

The ladder is strong, compact, lightweight and durable. Its patented construction of woven polyester webbing is reinforced with carbon fibre rods. The rod is enclosed in flanged tubular webbing which is fitted into, and stitched between, the double thickness pockets of the vertical webbing. In this way the loading is fully supported within the vertical members of the ladder.

The ladder can be loaded in both directions. It is 600mm wide and comes in lengths from 3-30 metres. A 30-metre ladder weighs just 25kgs and there are no metal parts.

“The ISO 799 strength test really put the ladder through its paces, ” says Pat Hobbs. “Successive rungs had to be loaded to 900kgs plus, and sustained for one minute without failure. The construction was also tested and approved for thermal ageing, weathering, UV light, oil resistance and practical performance.

“The order from MOL LNG is the result of trials of the Fibrelight Emergency Ladder earlier this year, ” he adds. “At the end of January one of our ladders was successfully deployed and tested on board a MOL LNG vessel at the Isle of Grain.

“We were delighted to receive a full report from Captain Gordon Young, MOL LNG Operations Manager, in which he explained: ‘On this occasion, the ladder was shackled to the stanchions on the handrail and led over the top of the handrail. Deployment of the ladder was quick and easy. Access to it was from the gate in the handrail, which allowed easy transition from the deck.

‘Once secured, two people tested the ladder. Both reported that stepping onto it with it over the handrail was preferable to climbing on to the ladder at deck level. Importantly, when descending, the footholds were easily located without having to look down, so it appears the spacing and twin lattice format are at the optimum distance.

‘During the test the ladder remained in a position parallel to the ship’s side without any tendency to twist. Both testers felt very comfortable climbing down the ladder, and also climbing back up. The overall impression of both of them, and the ship’s staff who witnessed the test, was that this was very suitable for the emergency evacuation of anyone trapped forward who might have to abandon the vessel in the 6-man liferaft.’”

“All-in-all we were delighted with the trials and grateful to MOL LNG for agreeing to undertake them, ” says David Taylor Director of Fibrelight Developments Ltd, who attended the trials. “We are very pleased that their early testing, followed by the all-important certification, has resulted in an initial order and very much look forward to further reports from them on the ladders in service.”

• The Fibrelight Emergency Ladder is produced by CQC Ltd. (www.cqc.co.uk) with distribution currently under negotiation. This is the latest addition to the range of equipment designed and introduced by Fibrelight Developments.

• Prototypes of a Marine Security Fence and a Propeller Entanglement device are currently being evaluated.