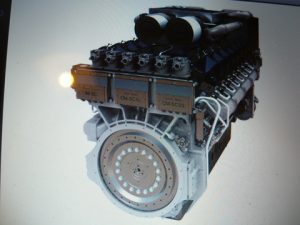 MAN Diesel & Turbo has announced an addition to its engine programme. The D7 high-speed engine delivers a 1.5 – 5 MW output at 1, 000 – 2, 000 rpm and is designed to serve a broad range of applications. The company states that the D7 will close the gap between its smallest medium-speed and largest high-speed engines and sets new standards in fuel efficiency, power/weight ratio and TBO-intervals.

The D7 is characterised by its robustness, efficiency, compactness and strength. MAN Diesel & Turbo has targeted tugboats, workboats, offshore service and supply vessels, navy patrol boats, super yachts and fast ferries as its core applications. The new engine will additionally serve non-marine markets such as the offshore, onshore power generation and rail segments. It will also be available as a gas-powered version for certain applications.

The D7 will play a central role in a new propulsion train devised by MAN Diesel & Turbo. Customers will be offered the engine as part of a package that includes gearboxes, propellers, switchboards, auxiliary gensets, and energy storage solutions. Orders for the new engine can be placed from 2014 on. 9/2012

MAN Diesel & Turbo SE, based in Augsburg, Germany, is the world’s leading provider of large-bore diesel engines and turbomachinery for marine and stationary applications. It designs two-stroke and four-stroke engines that are manufactured both by the company and by its licensees. The engines have power outputs ranging from 450 kW to 87 MW. MAN Diesel & Turbo also designs and manufactures gas turbines of up to 50 MW, steam turbines of up to 150 MW and compressors with volume flows of up to 1.5 million m³/h and pressures of up to 1, 000 bar.