Discussion about the Greek crisis and its possible resolutions 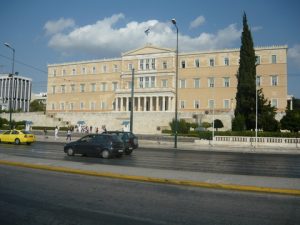 On 11 September 2012 a discussion took place at the London School of Economics about the Greek crisis. The first part of the discussion focused on (a) what should be the long-term “vision” for Greek economy and society, and (b) what obstacles are preventing the evolution towards that vision and what ways exist to circumvent them. There were four talks by a panel of speakers, which was chaired by Dimitri Vayanos, followed by a Q&A session. The second part of the discussion, chaired by Nikitas Konstantinidis, focused on how diaspora Greeks could help with the resolution of the crisis. The event took place under the auspices of the Hellenic Observatory at the LSE.

The first speaker at the panel was Pavlos Eleftheriadis. He argued that the Greek crisis can be attributed to the gradual emergence of ‘extractive’ institutions in the mid-1980s. Whereas cronyism has been a persistent feature of Greek democracy since the 1860s, important changes in the mid-1980s tipped the balance against independent institutions, against competitiveness and against the rule of law. The result was a closed, protectionist and corrupt political system which stifled entrepreneurship and innovation and controlled the largest news outlets, the private television stations. Joining the Euro exposed this flawed political system and magnified the consequences of its collapse. The way out of the crisis does not require major innovation. We must combine economic with political reforms that seek to restore the rule of law, fight corruption and enforce accountability. The challenge for Greece is to become a more open and just society and a social market whose economy is truly integrated into the global economy.

The second speaker was Apostolos Doxiadis, who spoke about the practice of politics in juxtaposition with political ideology. He made the distinction between the politics of principles and ideas, the politics of problem-solving, and the politics of clientelism. While no political action falls squarely within one of the above categories, the dominant paradigm in Greece at the moment is one of contrarianism and opposition to the Memorandum, to Germany, to immigrants. It is much easier to say no than yes, since that way the degrees of freedom are higher. On the other hand, the logic of clientelism is very protective of those very institutions that nurture it and as such appears antithetical to progress. The only way out of the crisis is through a wider consensus that can only be brought about by a political figure. What Greece needs right now is a novel, simple, and persuasive vision that is also accessible to the wider public.

The third speaker was George Prokopakis. According to him, Greece’s exit strategy from the crisis has three stages. The first is short-run crisis management, and the main objective is to stay in the Euro. There is general consensus on that objective both within society and a broad spectrum of political forces. The second stage is implementation of structural reforms, which will enhance the functioning of the state and the competition in markets. More support for reforms is needed from society because while reforms benefit society as a whole, they reduce the rents of some groups. The third stage is growth. This is more long term and, to some extent, a consequence of the others. Growth will come mainly from small firms, who must turn themselves towards foreign markets. The crisis has already resulted in the loss of 1.2 million jobs, which will take many years to be created again. To make any progress Greece needs at least six months of calm.

The fourth speaker was Andreas Koutras. He argued that part of Greek society has not realized or refuses to acknowledge the need for structural changes not only in the economy but also in society and personal behavior. This failure can be attributed to the lack of vision for the future. Scaremongering and blackmailing does not constitute a vision. Many citizens refuse to be subjected to austerity measures by corrupt politicians and degenerate parties that to a great extent are responsible for the current mess. New and not recycled parties is a vision. Greece is slowly becoming an inward looking, almost autistic, society that ostracises any dissenting or alternative voices. Anything that does not conform to a pernicious nationalism and a backward looking Greek-orthodox culture is crushed as anti-Greek. An open tolerant and respecting society is a vision. Economic prosperity would follow naturally after we produce civic and cultural capital. Patriots are not only the ones glued in a glorious past but those that strive to make a better future.

Given that the event came about through a decentralized initiative, the second part of the discussion was more organizational in nature. The overall goals of the discussion were i) the search for synergies between the various networks and initiatives that have taken shape outside Greece, ii) the creation of a common platform of understanding and debate on issues of Greek public policy reforms, and iii) the coordination of the rich human capital of Greeks in the UK for the common good of Greece.  Speakers included Nikitas Konstantinidis on behalf of the Greek Public Policy Forum (www.greekpublicpolicyforum.org), Dimitri Vayanos on behalf of the Greek Economists for Reform (www.greekeconomistsforreform.org), and Michael Jacobides on behalf of Redesign Greece (www.redesigngreece.org).

Apostolos Doxiadis is a writer. His best-selling novel ‘Uncle Petros and Goldbach’s Conjecture’, which brought mathematics into fiction, has been translated into over forty languages. ‘Logicomix’, a graphic novel of the epic quest for certainty in science and logic, was published in 2009 and immediately became an international bestseller.

Pavlos Eleftheriadis is a University Lecturer and Fellow in Law at Mansfield College in the University of Oxford and a barrister at Francis Taylor Building. He is the author of many essays in the philosophy of law, EU law and constitutional law. His book Legal Rights was published by Oxford Univeristy Press in 2008.

Michael Jacobides is Associate Professor of Strategic and International Management at London Business School, where he holds the Sir Donald Gordon Chair of Entrepreneurship and Innovation. Prior to joining the LBS, he was faculty member at Harvard and Wharton. He is Sumantra Ghoshal Fellow at the Advanced Institute for Management Research.

Nikitas Konstantinidis is a Fellow in Political Science and Public Policy in the Department of Government at the London School of Economics. He came to the LSE after spending two years as a post-doctoral researcher at the Institut Barcelona d’ Estudis Internacionals. He received his Ph.D. in Political Economy from the Woodrow Wilson School, Princeton University.

Andreas Koutras studied Astrophysics and Mathematics at the Universities of London and Cambridge. His PhD was on Einstein’s General Theory of Relativity. During the past 15 years he worked at a number of investment banks. He has written extensively on the Greek PSI restructuring and the use of the Collective Action Clauses (CAC) and the ECB’s operations.

George Prokopakis is a business consultant on organizational and data management issues. He was formerly a Professor at Columbia University of New York. Recently, he is working mainly on firm restructurings and reorganizations, data management, and finance.

Dimitri Vayanos is Professor of Finance at the London School of Economics, where he also directs the Paul Woolley Centre for the Study of Capital Market Dysfunctionality. Prior to joining the LSE, he was faculty member at Stanford and MIT.  He is an Editor of the Review of Economic Studies and a Director of the American Finance Association.

Rescued from the deep: a shipwreck treasure is centre stage at Bronze, the new Royal Academy exhibition

How do you weigh an ocean?