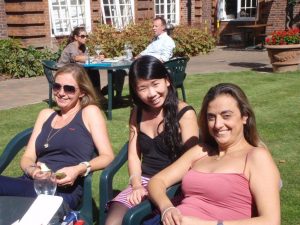 Shipping containers smashed and twisted by earthquake and tsunami, boxes lost overboard; ships smashing into quayside cranes; runaway goods locomotives: the compass of marine disasters awes the imagination. In the sweep of just one hour, executives at the international transport and logistics insurer TT Club offered dramatic illustrations of the scope of their claims portfolio to a special group of visitors: members of the Class of 2013 of the Executive MBA in Shipping & Logistics.

Known as the Blue MBA, the program comes under the umbrella of Copenhagen Business School and aims to equip executives to handle at top level the challenges of globalisation and those of strategic direction in their own organisations. Since 2001, the MBA has graduated 120 executives from 35 countries.

Robert Kempkens, a regional claims director at the TT Club

At TT Club headquarters in London last week, one member of the audience was both a guest and a host: Robert Kempkens, the insurer’s regional claims director for Europe, the Middle East and Africa, had signed up for the part-time MBA as a means of gaining an insight into management practices that he perceived was lacking in his earlier career as a lawyer, at Wessing Berenberg-Gossler (now Taylor Wessing) and at the Hamburg office of Ince & Co.

“The role of manager is something that lawyers are not so used to, ” said Mr Kempkens.

Based in London, the Hamburg-born claims director has been with Thomas Miller, managers of the TT Club, since 2006 and in his current post since February 2010. He is well acquainted with the type of insured claims and risk management procedures that were highlighted in the presentations.

Phil Nichols, global claims director for the club, reminded the gathering that pictures speak louder than words, and showed selected photos from club and industry archives with examples of:

*natural catastrophe: thousands of containers can be damaged by quake, storm or flood, as in the 2010 earthquake in Chile.  Every one of the containers affected represents a separate claim to the insurer involved

*collision: in August 2009 off Rotterdam the Panama-flag containership MSC Nikita was holed after collision with the general cargo ship Nirint Pride, and towed into Europoort, where the containers had to be unloaded. An insurer in such cases would be involved with the general average, the salvage operation and claims for wet damage and collision damage to containers 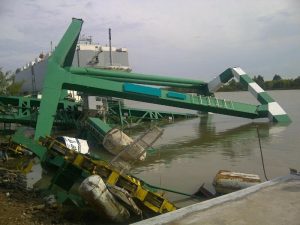 A crane blown down a quay in a sudden storm, despite the brakes being on. Fortunately, no-one was injured. Photo courtesy the TT Club

*again collision: in August 2010 after the MSC Chitra and MV Khalijia were in an incident off the Mumbai coast, the first ship sank and spilled containers and oil, creating a hazard to other shipping, and shutting operations at the huge port for five days

*port transport emergency: a diesel train on a private line suffered brake failure, and to save themselves, the driver and a workmate jumped off. The runaway train caught up with and hit another engine, injuring its driver. The trains went over an embankment, and one struck the mouth of a tunnel. The incident created liability for damage to two trains and an injury claim. Luckily the trains did not continue to the main line, where the consequences could have been much greater

* fire: a tank container explosion in South Africa set alight nearby refrigerated containers. In cases like this, there could be a potential claim against one club member by another. So files have to be kept confidential by the respective claims executives

*grounding: the Rena incident has caused huge headaches for the industry. The container ship grounded on Astrolabe Reef, Tauranga, in October 2011 and broke in two with the stern section sinking, causing New Zealand’s worst maritime environmental disaster and one of the biggest P&I claims of recent times. More than 250 boxes were reported lost overboard as bouts of bad weather buffeted the wreck

*dangerous goods: MSC Flaminia, a chemical container ship, was still smouldering two months after a mid-Atlantic explosion in number four hold that killed one seafarer instantly, and another died from his injuries. Of 2, 876 containers, 149 were classed as dangerous goods, according to the Maritime and Coastguard Agency. Ports were reluctant to accept the ship, and states did not want it passing through their territorial waters

*dock incident: a ship experienced steering difficulties as it approached a berth and hit a tuna boat which in turn damaged the berth, fortunately avoiding hitting the quay fender system, which would have meant an enormous bill

Peregrine Storrs-Fox, risk management director at the TT Club, spoke of the importance of interacting with the wider industry on matters of safety and emerging risk. By way of an example of loss prevention analyses, he presented the review of 1, 800 logistics claims, which led to payments of $120m, where operational error – the human factor – accounted for 63% of the cost. 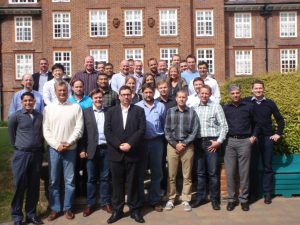 Participants in the Executive MBA in Shipping and Logistics pose for a group photo during the course module in London.

He listed poor systems and processes, theft, and bad stowage and handling as important but frequently avoidable causes of claims. Customs problems, clerical errors such as putting the wrong temperature value on documentation, and contractual issues, also produced claims. Mr Storrs-Fox said that 87% of theft claims arose when a member used a contractor – “and in logistics that is what you do every day of the week, so it is worth looking into what you are doing with your sub-contractor and what controls there are, “ he advised.

With his fellow participants on the Blue MBA course, Mr Kempkens was in London for a week of intensive study with expert lecturers into investment analysis, risk management and finance. The London module included methods of capital budgeting, principles of financial accounting and performance measurement, the functions of financial markets, and financing of ships and companies.

The TT Club’s extensive chain of correspondents, and its network partners, helps Mr Kempkens keep in touch with club members – including port and terminal operators and freight forwarders – throughout his huge geographical area of responsibility. Recent claims demanding attention have included those involving shipments of copper from Africa to China. Theft continues to cause problems throughout Europe, including UK criminals picking up cargo that belongs to someone else.

The meeting at TT Club headquarters was organised through the good offices of Knud Pontoppidan, chairman of the club. Mr Pontoppidan, who has been a prominent personality in ship owning for many years, serves as a member of the advisory board of the Blue MBA.

Opening the event, TT Club chief executive Charles Fenton said that the insurer was formed 43 years ago by ship owners who were embarking on unitisation of cargo, when existing marine insurers did not want to carry that type of risk. As a not-for-profit organisation, the club sought to balance the money collected from organisations that required cover and the claims paid out. It is a model with a long history in marine insurance, said Mr Fenton.  Unlike other insurance companies, the club has discretionary rules which enable it to pay claims in certain situations not previously envisaged.

Irene Rosberg, the MBA program director, expressed thanks to the club management for its welcome, and said that its presentation was in line with what “we have always talked about, the holistic view of the shipping industry. “ She presented to Mr Fenton and his colleagues a model of a Viking ship as a gesture of appreciation to the club for hosting the meeting.