EM campaign in the Barents Sea 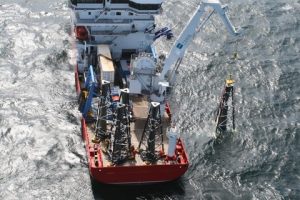 More and more oil companies see the advantage of PetroMarker’s unique EM technology to evaluate prospective acreage, particularly in the Barents Sea.
PetroMarker made a presentation at the EAGE conference in Vienna about the results of an EM survey performed on the Snøhvit (Snow-White) field, highlighting the penetration and resolution displayed by of vertical EM.

As most of these surveys are linked to the on-going APA round, the oil company names or the specific location of the surveys cannot be divulged.
According to the Norwegian Oil Directorate (NPD), the Barents Sea is one of the key areas for future O&G production in Norway. The NPD has launched series of seismic campaigns in previously un-touched parts of the Barents Sea.

Pareto Securities recently pointed out that the Barents Sea discoveries will save Norway’s declining production.
The agreement signed last year between the Norwegian and the Russian governments on maritime borders in the Barents Sea and the Artic Sea was a boost to renewed exploration.

PetroMarker AS PetroMarker AS is a marine EM oil & gas exploration service company based in Stavanger, Norway, whose activity help oil companies in:.

PetroMarker’s EM technology is based on the unique, fully patented, vertical electric method which offers better accuracy, high sensitivity and deeper penetration, depending on local geology.
PetroMarker AS activities range from feasibility studies prior to offshore investigation, preparation of the offshore surveys, acquisition and processing of the data, interpretation and recommendation to the oil companies.

Piracy and War Risks – Considerations for Owners and Charterers