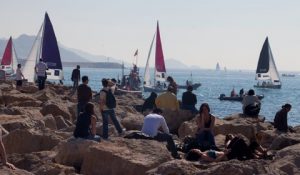 British skipper determined for a good result in Marseille

Ian Williams and his GAC Pindar sailing team are focused and ready for the Match Race France that begins next week in Marseille from 24 – 29 September.

Hosted at the Yachting Club de la Pointe Rouge, the sixth leg of the Alpari World Match Racing Tour will be held in the bay of Marseille where some of the world’s top-class sailors will compete in identically matched J80 boats.

Williams, the reigning ISAF Match Racing World Champion, and his team have had to regroup after a very disappointing result in St Moritz where Williams and Hansen, the team leaders of the series, were right at the bottom of the qualifying table. Ultimately, it all came down to the very last match of the qualifying session. Both skippers knew the importance of the race, that victory would mean that their closest rival would be knocked out of the regatta, but it just wasn’t meant to be for Williams as Hansen took the win costing the British skipper dearly.

The British skipper comments: “The GAC Pindar match racing team is looking forward to Match Race France and looking to improve on our performance in St Moritz last month. From the Alpari Match Racing Tour, we count our best four events prior to the Monsoon Cup, and having made the podium three times so far this season, we are looking for a top three in France which would give us a chance at the World Title going into the final in Malaysia in December.”

Despite the bad result in St Moritz, Ian Williams remains in second place on the overall Tour standings with 87 points, just six points behind Bjorn Hansen. With three podium results already secured and with two more events to go before the spectacular Monsoon Cup – Williams is still on target to claiming the World Match Racing title for an incredible fourth time.