Understanding the Crisis in Greece – 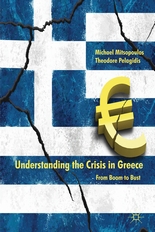 Understanding the Crisis in Greece – From Boom to Bust **

An account for all, for all sins which need to be addressed but also immy solved! Michael Mitsopoulos* and Theodore Pelagidis account no one affords to miss!

In recent years the Greek economy has been rigorously debated in the international financial arena. This book engages with the current economic challenges facing Greece, examining how and why a previously strong economy can tether with complete collapse. The Greek economy of the 90’s posed a unique international paradox. It combined strong economic performance that is rapid GDP growth and strong productivity growth, with a weak performance on many other fronts that range from poor labour market institutions and low competitiveness, to poor environmental protection and high levels of corruption.

This volume examines the working of the Greek political system and the way it relates with the Greek society, the salient aspects of the Greek Constitution and the design of the political system and, ultimately, the failing of the rule of law. It presents the facts that undermine the long term prospects of the economy and reveals the nature of the powerful redistributive rent-seeking groups that keep markets closed and distorted, vehemently resisting reforms in Greece today.

This book is essential reading for all interested in Greece’s economy, political economy and European economics.

Following a unique Introduction it continues with: Vikings in Greece: Rents, the Design of the Greek Political System and the Blockage of Reforms Corruption, Policy Inadequacy and the Greek Constitution Efficiency and Quality of Justice in Greece Strong Growth and Weak Institutions: The Greek Paradox Re-considered Epilogue: The 2010-11 Greek Economic Crisis and the Conditionality Program

*MICHAEL MITSOPOULOS is Co-ordinator of Research and Analysis at the Hellenic Federation of Enterprises, Greece. He has previously worked in the Greek financial sector and has held governmental positions. He has taught as an appointed lecturer at the Economic University of Athens and the University of Piraeus.
THEODORE PELAGIDIS is an advisor to the Greek Finance Minister and Professor of Economic Analysis at Piraeus University, Greece. He is also a senior professorial fellow at the Hellenic Observatory, London School of Economics and Political Science, UK

BIBBY brings its heritage and exprtise to shipmanagement sector