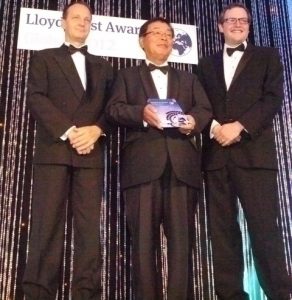 London – World leading classification society ClassNK was awarded the Safety Award at for its efforts to ensure the safe carriage of nickel ore cargoes at the Lloyd’s List Global Awards on 26 September 2012. The Lloyd’s List Global Awards, held each year in London by leading maritime media company Informa, recognize companies and individuals from around the world for their contributions to the growth and development of the global maritime industry.

This year’s distinguished panel of 10 independent judges selected ClassNK for the Safety Award for the Society’s efforts to improve the safety of maritime nickel ore transportation. Nickel ore has been called the “world’s deadliest cargo”, and was directly linked to the loss of 4 vessels and the deaths of 66 sailors in 2010-2011.

While cargo issues traditionally fall outside of the scope of ship classification, ClassNK, which classifies more than 1/3rd of the world’s bulk carrier fleet, began carrying out intensive research on the characteristics of nickel ore in order to prevent such casualties in the future.

The results of this research were compiled in ClassNK’s new Guidelines for the Safe Carriage of Nickel Ore, and released free of charge to the maritime industry. The Guidelines include not only operational best practices to ensure the safety of vessels during the loading and transportation of nickel ore, but also the world’s first structural and stability requirements for existing vessels, as well as for constructing new vessels to safely transport this cargo which may liquefy. These new standards are already being used by shipyards to design a newer generation of bulk carriers, and have earned the recognition of both flag states and industry groups such as INTERCARGO.

ClassNK Chairman and President Noboru Ueda accepted the award on behalf of the class society and emphasized the awards importance by saying: “Nickel ore and other cargoes that may liquefy in transport represent a potentially grave threat to vessels and their crews. Addressing the technical and other operational challenges posed by these cargoes is not easy, but it is essential to ensuring a safer future for our industry. With our new guidelines we have made a great step forward in this fight, and we are honored to be recognized for our effortsby  the maritime industry.”

As both the world’s largest classification society and the world’s leading class society for bulk carriers, ClassNK is continuing its research efforts to better understand the properties of these deadly cargoes, and will continue to develop new rules and guidelines to further increase the safety of the maritime industry.