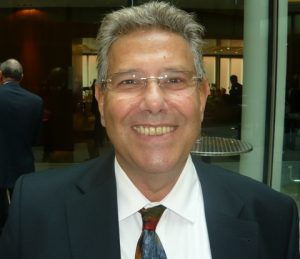 Further examination of the data suggest that in parallel with the structural change in the response of freight rates to capacity utilisation there was a similar structural change in the demand for dry. Demand increased around a trend of 2% before 2003 and 7% afterwards. The popular explanation of these structural changes in the dry market is that they are due to the rise of China to a preeminent place in world trade. But this hypothesis is also not supported by actual data. Empirical tests show that the change in the trend in Chinese steel production occurred two years earlier in 2001 and ended in 2006. Chinese steel production grew around a 6.5% trend from 1987-2001, but on the much steeper trend of 22% in the period 2001-2006 and at 8.5% ever since. Similarly, cargo handled in major ports in China, a direct measure of the importance of China in world trade, also incurred a structural change but even earlier in 1998, five years earlier than the structural changes in the dry market. Cargo handled in major ports in China increased around an 8% trend from 1985-1998, but at 17% in the period 1998-2007 and at 12% thereafter.

The paper then proceeds to formulate a hypothesis that what triggered the structural change in shipping (there is a similar structural change in both the dry and wet market in 2003) is the advent of investment banks in the commodities market. Institutional investors discovered that commodities markets offered the opportunity of reaping lucrative profits without taking excessive risk, as some markets experienced prolonged periods of contango while others backwardation. From 2005-2009 retail investors increased their appetite in trading commodities through a huge expansion of Exchange Traded Funds (ETFs), thereby markedly increasing the speculative flows into commodities.

Commodity prices act as a signal to owners and charterers as to developments in demand and supply and therefore of the conditions in shipping. The speculative flows into commodities distorted these price signals. In the upswing of the cycle they created conditions of euphoria more than justified by economic fundamentals. In the downswing of the cycle, they have created a dire state for shipping once again, more than justified by economic fundamentals, thereby contributing to the current gloom.

As liquidity has increased smoothly in the last thirty years, it is not the amount of liquidity that causes large fluctuations in freight rates. Rather it is how much liquidity is channelled at any point in time in commodities. This depends on economic fundamentals (e.g. the growth of China), but also on the degree of risk aversion. Rising risk aversion triggers liquidity withdrawal from commodities, while increased risk appetite injection of new liquidity. A number of variables trigger fluctuations in the degree of risk aversion: key short term interest rates and the dollar. In conditions of systemic risk there is withdrawal of liquidity from all risky assets. The best barometer of systemic risk may be the S&P 500, which drops aggressively in a short time span and rises abruptly once the correction is over. Accordingly, large fluctuations in S&P are associated with simultaneous swings in commodity prices.

This theory suggests that freight rates are a linear function of capacity utilisation, commodity prices, key interest rates, the dollar and the S&P. Such a model can explain the actual data without invoking the case of a structural change. The coefficient of capacity utilisation has a steady value of 17.5% for the entire period. The hypothesis of a non-linear supply curve is a myth, not reality. The seemingly apparent structural change is due to the omission from the traditional model of the other four variables. 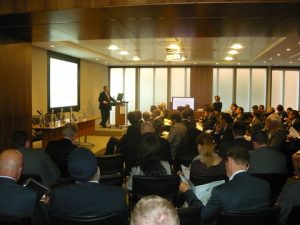 Professor Karakitsos at the podium speaking at a full house

The implication of this analysis is that China is not the only factor that can reinvigorate the prospects of the dry market. Liquidity can return to commodities even with slow growth in China and that can improve the fortunes of shipping in the medium term. Hence, China is a necessary, but not a sufficient condition for a quick and spectacular recovery of the dry market. The medium term outlook is for a recovery of China and the world economy, but with high risks, and the return of liquidity to commodities in around 2015 that would resuscitate the fortunes of shipping.

For more information viewers can write to elias.k@globaleconomicresearch.com

** Will  bring you the full coverage of this unique event in the coming days.

Draghi indispensable, Europe and US reconcilable