Widespread investment in ports and infrastructure has translated into heightened confidence in Asia’s commitment to developing as a world-class cruise destination and source market.

Over 350 delegates took their seats for the opening session of the conference, with an impressive line up of top industry executives, who came together to discuss Asia’s significant growth within the cruise industry, its value as a source market, its popularity as a destination and its future opportunities and challenges.

The Asia Cruise Association’s Chairman Zinan Liu described China as a high risk/high return market, saying: “China is more a venture capital asset rather than blue chip.” Asia as a source market is still untapped, with a penetration rate of less than 0.1% compared to 3.3% in the US. China, in Liu’s view, presents the region’s most promising market. 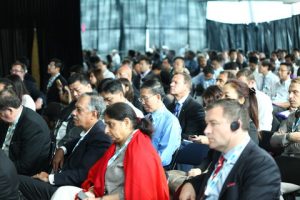 Carnival Australia CEO Ann Sherry acknowledged the obvious commitment and support for the cruise industry in Shanghai and noted cruise brands have become increasingly active across the Asia-Pacific region with ‘holistic’ developments such as large-scale port infrastructure investment and procurement.

Sharing the experience of the Pacific market, which Sherry described as the world’s fastest growing cruise market, she said this benefits Asia because ships transit there seasonally.

Royal Caribbean International’s Lisa Bauer, EVP Global Sales and Marketing, credited the Chinese government for the ‘Progress, Prospects and Potential’ which are the conference’s themes. She went on to emphasise that China offers cruise lines a unique opportunity to grow, and that the way to this growth is through knowledgeable, well-educated travel agents using good technology.

Bauer’s biggest concern is the widening gap between terminals and destinations, with the latter not currently keeping up. She said the industry needs to get together to identify ports and destinations people want to visit then tackle how to ensure they have a great experience.

William Ng, COO, Star Cruises, said it was encouraging that last year, more than 20m people cruised worldwide, a figure projected to grow to 23m in 2015. At the moment, Asia accounts for less than 10% of the total.

“You can imagine that the potential is going to be huge. And international cruise lines are gearing up for a piece of the action, ” he said. The rising number of ships sailing in from the international players shows confidence in the region’s potential.

“Asians are becoming a key source market for cruise ships in the region and worldwide, ” Ng said. He noted more than 57m Chinese people travelled abroad in 2010, spending a total of US$55bn, and the World Tourism Organization estimates the total number of outbound tourists from China will reach 100m by 2020. Cruise travel, however, is still relatively small in China.

The conference will continue throughout Friday 28th September and will discuss Asia’s new entrants to the cruise business; shipbuilding and refurbishment in Asia and the role of Asian yards; operational challenges for the industry in Asia; and Asia’s river cruise and river boat tourism.

Running alongside the conference is a two-day travel agent training programme, which provides local Chinese travel agents with valuable information on selling cruise products. Parallel to the conference and travel agent training sessions is the showcase exhibition featuring over 40 organisations from within Asia and around the world, representing cruise lines, cruise ports and destinations, shipbuilders, food and beverage companies and many more.

Freight and logistics workers step up action in South Africa

Shipping in dire straights, but…