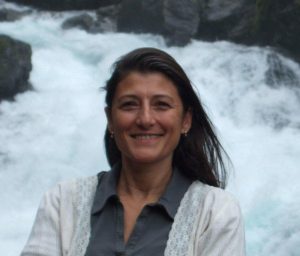 London artist Belgin Bozsahin is creating strikingly modern sculptural ceramics in the spirit of some of the most beautiful medieval craftsmanship of her native Turkey. Her latest fluid, shimmering designs are finding a widening appeal to clients, as collectors and for their domestic settings, and now unsurprisingly marine connoisseurs are taking to the notion of purchasing her works to set off the décor of super-yachts.

A considerable source of her inspiration is the design of 16th century Iznik tiles and mosaics that flourished in the reign of Süleyman the Magnificent (1520–1566). Iznik in northwestern Turkey had shrunk as it succeeded the Byzantine city of Nicea, but regained much glory through its celebrated ceramics.

Belgin’s latest work, a collection of three-dimensional modular ceramic wall pieces, was unveiled at the Decorex International fair at the Royal Hospital, Chelsea, in September 2012, and she is preparing larger scale, more abstract pieces for future shows, including her second appearance at Windsor Contemporary Art Fair at Royal Windsor Racecourse, which in 2012 is on November 10-11.

Tulip. From the series Beneath the Surface. Porcelain hand-formed scales.
By Belgin Bozsahin

This is the latest stage in a career which began with painting in oil – her landscapes and figurative canvases at one time graced the passenger areas of the QE II cruiseship. As she diversified her talents, Belgin completed a degree in ceramics at the University of the Arts, London, including a year of study at the Art Academy of Bergen, Norway. She has lived in London for 24 years but retains a deep affection for the cultural heritage of her city of birth, Istanbul, and of her country as a whole.

Her new collection comprises two ranges, Beneath the Surface and Bouquet, inspired by Iznik work at its aesthetic height. The pieces can be made to any size and are easily adaptable to create installations for public spaces and domestic settings alike.

Iznik blossomed from simple earthenware production when artisans were brought in from elsewhere in Anatolia to turn out high quality works, initially of cobalt blue under a colourless glaze, incorporating Ottoman and Chinese patterns, to the order of the Ottoman court in Istanbul. As the 16th century wore on, the decoration acquired a more dynamic style, and shades of sage green and purple were added. In mid- century, bright red, green and lilac came to dominate. As Ottoman power came under pressure, demand for Iznik ware declined. Iznik tiling remains evident in Istanbul in religious buildings and palaces, but there was a 400 year gap before it was produced again in any meaningful way: windows of the headquarters of the French fashion house Hermès, and shopping zone Shibuya Square in Tokyo have been decorated with Iznik tiles. 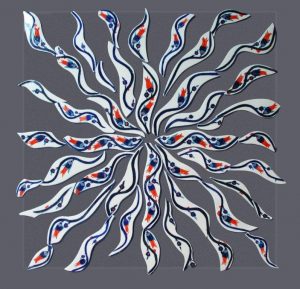 Echoing this tradition, Belgin in her Bouquet series paints by hand individually shaped pieces of porcelain with, in her latest work, carnations, choosing deep cobalt blues, crimson reds and lime greens. The playful element is putting the 40 to 50 pieces together because each piece is designed separately, and they need to combine to create an overall design with a three dimensional feel. The result in some ways recalls the patterning in a beautiful carpet.

Belgin continues to experiment with types of backing, which can be coloured or transparent, with the aim “that the natural flow of the design is unimpeded, ” she says.

In contrast are the highly textured surfaces of the wall panels she entitles Beneath the Surface, using what she says is a unique technique she has developed specifically for her wall-based work.  She embeds small scales of porcelain in painted clay slabs, creating a delicate but lively surface that can remind some of the restlessness of the seas.  The panels are high fired and durable, and suitable for interior or exterior spaces.

Belgin says: “The series examines the notion of continuing evolution and change; that things are not perfectly smooth, spotless or still.  Perhaps the work epitomises the dynamic force inherent in all of life’s many layers, weaving its magic, allowing textures to morph and create anew.”

Untitled. From the series Beneath the Surface. Porcelain hand-formed scales.
By Belgin Bozsahin