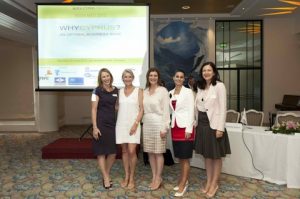 Limassol, 15 October 2012   – WISTA Cyprus is proud and excited to announce that the 2014 Annual General Meeting and Conference of WISTA International will be held in Limassol, Cyprus. This means that some 300 of the most influential women in Shipping and Trading will visit the Mediterranean island.       The WISTA International AGM and Conference is held in a different country each year, this year 258 members from 35 countries came together in Paris, the city of light, to discuss “The new challenges for the Shipping Industry: the era of innovations and modernity”. Next year the event will take place in Montreal, Canada. The other city contesting with Limassol to organize this prestigious conference in 2014 was Shanghai, China.

WISTA Cyprus was chosen because it is one of the fastest growing National WISTA Associations, a little over a year after it was established it counts already 57 members. Another reason is the multinational profile of the members, 19 different nationalities come together in this highly professional group of shipping and trading executives.

Earlier this year WISTA Cyprus already organized the successful WISTAMED Conference at the Limassol “Le Meridien” Hotel, where delegates from Greece, France, Italy, Spain, Turkey and the Netherlands joined the Cypriot shipping community to discuss why the beautiful island is such an ideal base for shipping companies.