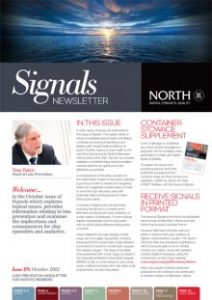 The ‘A’ rated, 170 million GT North P&I club has launched a new loss prevention initiative to help get ships’ masters and officers talking to each other about health and safety issues at sea.

North’s head of loss prevention Tony Baker says, ‘While drills, training videos, guides and posters all help to deliver safety messages on ships, getting people to actually talk and think proactively about risk is the most effective way to raise awareness. Regular health and safety discussions also facilitate sharing of ideas and concerns and help seafarers to bond.’

Elsewhere in today’s ‘Signals’ the club draws attention to the importance of maintaining social interaction between crew members in the increasingly isolated and automated working environment of modern ships. ‘Having a crew that is close-knit and of high morale helps ensure both mental and physical well-being on board, leading to a safer environment for everyone, ’ says Baker.

Talking Points are basically two-page sheets designed to assist masters and safety officers when preparing for on-board safety meetings by raising awareness of the common causes of accidents and incidents. The first page shows an image of a safety incident followed by a short series of questions, and can be distributed to those attending safety meetings or safety briefings. The second page contains suggestions and can be referred to by the meeting co-ordinator for guidance.

‘The idea is exactly what it says on the tin, ’ says risk management executive Colin Gillespie. ‘The sheets provide scenarios and examples of issues that ships’ crews will come across on a regular basis which, from our experience, present a risk. We have then set them out in a simple format to prompt discussion.’

The first Talking Point sheet is on the subject of grinding wheel cutting disc failure and can be downloaded from the club’s website at www.nepia.com. Members will be alerted via the club’s E-News service to new sheets as soon as they become available. Further details of North’s full range of loss prevention initiatives can be found on the club’s website.

North is a leading marine mutual liability insurer providing P&I, FD&D, war risks and ancillary insurance to 130 million GT of owned tonnage and 40 million GT of chartered tonnage, with 4000 ships entered by 400 members worldwide. It is based in Newcastle upon Tyne, UK with regional offices in Greece, Hong Kong, Japan and Singapore. The club is a leading member of the International Group of P&I Clubs (IG), with over 13% of the IG’s owned tonnage. The 13 IG clubs provide liability cover for approximately 90% of the world’s ocean-going tonnage and, as a member of the IG, North protects and promotes the interests of the international shipping industry.