The inauguration of the exhibition

The marine environment is indirectly impacted upon by human activities inland, even at a distance of many kilometers.

Demonstrating this important message was the primary motivation for selecting the border city of Kilkis to be the fourth stop of HELMEPA’s Marine Environment and Sciences awareness campaign. The campaign is being implemented across 12 Greek cities and towns up until June 2014 with the support of independent charity, “The Lloyd’s Register Educational Trust (The LRET)”*. 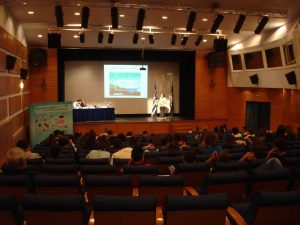 The activities in the city of Kilkis, under the auspices of the Municipality, began with the Workshop titled “Litter: a problem affecting us all” on Thursday, 11th October at the Town Hall Conference Centre. Representatives of Local Government and other regional stakeholders, teachers, students and environmentally aware members of the public attended the workshop.

During his welcoming address, the Vice Prefect of Kilkis, Mr. Ch. Gountenoudis, mentioned those environmental issues which are a pertinent problem throughout the broader region. Joined by the Deputy Mayor of Kilkis, Mr. K. Papadopoulos, they thanked HELMEPA and The LRET for bringing the campaign to their city. A brief welcome by the Director of Secondary Education in Kilkis, Mr. G. Constantinidis, followed. He remarked upon the significance of initiatives such as these in fostering a heightened ecological awareness among the youth. 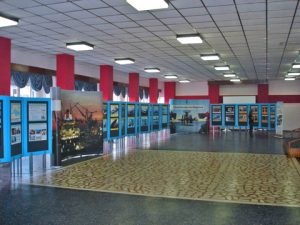 The Exhibition at Kilkis

HELMEPA’s Director General, Mr. D. Mitsatsos, was unable to be present and so Mr. C. Triantafillou – a member of HELMEPA’s Environmental Awareness Section staff – delivered his message on his behalf. The Director General’s message closed as follows “I believe that this initiative of ours will contribute not only to the enrichment on environmental issues but also to the projection of a significant message. That we Greeks never forget the ties that bind us to the sea together with the respect with which we are obliged to treat it, independent of the current crisis in our country, which we will overcome as we have done so many others throughout our long history”. Following these remarks, Mr. Triantafillou went on to present to the audience HELMEPA’s 30-years-long experiences on the issue of marine litter. 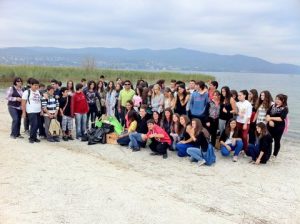 In the presentations that followed, Ms. V. Gounari of the Municipality of Killkis and Mr. M. Seferlis of the Greek Biotope/Wetlands Centre (EKBY) spoke about waste management at the local level and about the ecological significance of Lake Doirani and the threats to it arising from human activity, respectively. Ms. A. Delipappa of North Aegean Sea Canneries S.A. – a member of HELMEPA –  gave an overview of the company’s environmental policy and Mr. J. Linardakis of the Secondary Education Directorate of Kilkis, went on to discuss the structure of the environmental curriculum in local schools.

Attendees listened with keen interest to the presentation given by students of the 2nd High School of Kilkis on the environmental programs they participate in. Indeed, the School has twice been awarded the “Eco-schools” ecological flag for its programs. 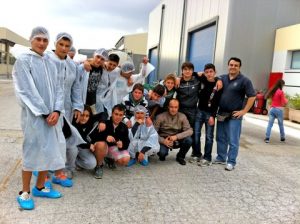 That evening, the Exhibition titled “The Marine Environment, Shipping and Sciences” was inaugurated at the Garrison Officers’ Club of Kilkis by the Deputy Mayor and by Lieutenant Colonel of the 71st Air Brigade “Pontos”, N. Paraschos. Over 800 students from local schools will visit the exhibit.

From experiences in other cities visited to date, a fundamental conclusion that has arisen is that young students seem to be unfamiliar about many facts relating to their local aquatic environment. To address this in Kilkis, on Friday, 12th October, HELMEPA organized an excursion for 80 students of the 2nd High School of Kilkis to Doirani Lake, in cooperation with the Environmental Education Center of Kilkis. After being guided through a tour of the museum, the students together with their teachers participated in a voluntary clean-up of the Lake bank.

That same morning, the students had visited the North Aegean Sea Canneries S.A. premises. There, children had the opportunity to both see the production process first hand – from the processing to manufacturing of the seafood, according to European standards of safety and hygiene. They also had the chance to speak with specialized scientists about the specifics of the industry.

HELMEPA’s environmental exhibit will remain at the Kilkis Garrison Officers’ Club until Tuesday, 23rd October and will be open to the public in the evenings between 6pm and 8pm.

*Notes: The Lloyd’s Register Educational Trust (The LRET) funds education, training and research programmes in transportation, science, engineering, technology and the safety of life, worldwide for the benefit of all

Fichte & Co wins the LLoyd’s List ME and Indian Subcontinent