From London to Istanbul – DHL workers united and strong 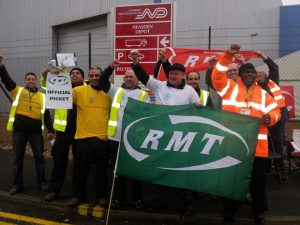 22 October 2012 – The ITF today delivered a message of support to striking RMT members at a London depot from unfairly dismissed  DHL workers in Turkey.  The RMT members on strike in Neasden from 00:01 to 23:59 on Monday 22 October are calling for parity with their colleagues at DHL’s Enfield North London base.

One DHL driver at the picket line said: “Today we are striking because DHL are failing to pay us as others. We are not fighting to be rich, we just want to pay our bills.”    Alen Clifford of the ITF’s organising globally team delivered the strong message of solidarity from the Turkish road transport union – Tumtis,   the ITF affiliate representing the 21 sacked workers.  He told the RMT members that workers in DHL Turkey, who have held non-stop picket lines at company bases in Istanbul for 128 days in protest at sackings and victimisation of DHL workers in Turkey, stand in solidarity with RMT members.

Bob Crow, RMT general secretary, stated: “RMT welcomes the international support for our DHL members in Neasden which is a great example of the trade union movement operating across national borders to take on a massive global player in the transport and distribution industry.”    Steve Hedley, RMT assistant general secretary, delivered a message of solidarity to the workers in Turkey from the DHL workers at the Neasden depot. See the film clip below to hear from the drivers and their message to DHL and the workers in Istanbul.