Complete collapse of euro is unlikely 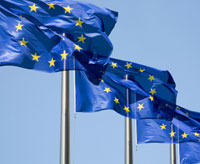 Despite continued anxiety around the future of the euro it is unlikely that the single currency will completely collapse, lloyds.com has been told. Although an exit by one or more countries from the euro is possible.

Stuart Simpson, treasurer of Lloyd’s, said: “The euro will continue to exist, unless Germany decides to withdraw, but there may be an exit by one or more of its peripheral countries, like Greece, Italy or Spain.   Lloyd’s coverholders and ratings agencies agree with Simpson’s comments.   Sam Dobbyn, associate director of analytics at AM Best said: “The euro collapsing is an extremely unlikely event but not an impossibility, ” while Mike Holley, CEO at Lloyd’s coverholder Equinox Global estimates that the chance of a collapse is just 10%.

Lloyd’s is prepared  However, if there is to be a break-up in the single currency, Lloyd’s – which has more than £50bn of investment assets – is prepared, Simpson said. “There has been a lot of contingency planning by us and other participants in the market about how we will respond and continue to operate”.  Dobbyn added that AM Best has noticed that a number of insurers have included a total collapse of the single currency in their scenario planning.

The countries at the centre of the worry are the economies of the PIIGS countries (Portugal, Ireland, Italy, Greece and Spain), which have seen yields on their bonds rise significantly as the market worries about the ability of local governments to repay billions of dollars of loans, given to them at a time when credit was cheap in the early 2000s.

Many investors have moved their investments away from the PIIGS countries, electing for assets that are traditionally safer and more conservative. Lloyd’s investment exposures to these peripheral countries are very small.   Exposure to a banking collapse weighs heavily on the minds of investors like Simpson. “We are all exposed in the event of a global banking collapse, ” he said. “Where there is concern is the potential for contagion to the financial markets and the banking industry” he said, adding that Lloyd’s can’t simply “stop investing” its assets. “Everyone has to make their own decisions, ” he said.

AM Best added in its own report that the European worries were making for a “challenging environment” for both non-life and life insurers in the near to medium term.