The AMVER Awards 2012 in Athens – the President’s speech 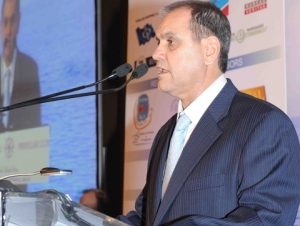 The President of the Propeller Club Antonis D. Faraklas delivering his welcome speech

Following our reporting on the AMVER Awards Athens 2012 on the 25th of October, we bring you herebelow the President’s Antonis D. Faraklas brief, but to the pont, welcome speech:Dear Honorary Guests,

As Shipping is still going through one of the toughest periods of the last 20 years we have the pleasure to welcome you to the AMVER Awards, which once more is organised by the Embassy of the United States in Greece, the Propeller Club International, Piraeus Port and the United States Coast Guard.

Tonight I have the pleasure to welcome:

As president of the Propeller Club International, Port of Piraeus, one of the biggest Clubs worldwide with more than 350 members, I want to emphasize the importance of continuous support to the AMVER Program, the only program designed and working for mariners in the time of ultimate need irrespective of nationality, religion etc., and which could not have been possible to operate as efficiently as it does without the involvement of the United States Coast Guard.

Moreover, I am also proud to announce that this year the number of awards earned by Greek controlled ships is higher than any other year, reaching the amazing number of 1066 ships and we all hope that this number will continue to grow as companies recognise the importance of participating in this system.

All of us have to remember that the Propeller Club International  Port of Piraeus is a charitable organisation actively promoting the cooperation between Greece and the United States of America mainly in the shipping sector by assisting educational organisations like the University of Piraeus and Chios, The Merchant Marine Academy of Aspropyrgos, The American Community School and the American College of Greece and organising seminars and events with topics inspired form current issues faced by ship-owners world-wide and the marine industry.

Dear all, Seafarers and Owners, it is important to realize that we should all work together to achieve our common target which is to promote the safety culture on board and ashore and which is the essence of these awards. By joining the AMVER program our common goal is becoming easier.

Concluding, I want to thank our sponsors for their invaluable assistance in organising this very important celebration especially in today’s difficult financial environment.