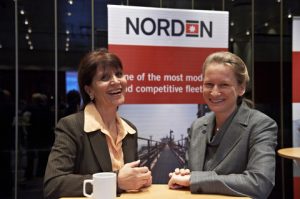 Katharina Stanzel (WISTA Personality of the Year, 2012) on the right, with Irene Rosberg (president, WISTA Denmark).

Seatrade’s Tanker Industry Conference in Copenhagen provided an excellent  opportunity for the new WISTA Personality of the Year Katharina Stanzel, and WISTA Denmark president Irene Rosberg to meet for an informal talk  on the value of the Women’s International Shipping and Trading  Association. Maria Dixon, President of WISTA-UK was there:

Ms Stanzel, managing director of Intertanko, was named the WISTA 2012  personality at the WISTA International conference earlier in the month  in Paris. She was nominated by WISTA UK, which praised her commitment to environmental principles and her record as “a woman of action.”

The Intertanko director gave the keynote speech at the event, on October  23, and chaired the first session entitled “Ship Finance and  Sustainability”.   Thereafter she and Ms Rosberg managed to find time to catch up on significant topics, led by the importance of women in the  shipping industry and the role that WISTA plays in enhancing the profile of professional women in the sector.

Ms Stanzel regretted that she could not be in France to accept the  Personality of the Year award because of a major commitment at IMO but  promised to do her best to be  in Canada for the next year’s WISTA  International conference.

More than 120 people from 17 countries attended the Seatrade gathering, at  the Radisson Blu Scandinavia Hotel in the Danish capital.
Ms Stanzel welcomed attendees and spoke of the development of more efficient  methods of moving liquid cargoes and the continued advances in safety  and environmental responsibility within the tanker industry. Of the  current state of the market, she said:”Owners know that their ordering  of tonnage during the boom caused oversupply, and we are dealing with  the consequences of that oversupply now. However, others also  contributed to this situation; banks offered easy finance, shipyards  expanded capacity and brokers aggressively pushed deals. We are all in  this together.”

Herbert Lom, the Pink Panther, and a lucky escape from being trapped in the meltdown at Lloyd’s