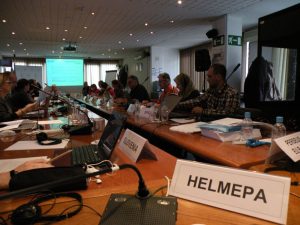 Following an invitation by the organizers, HELMEPA participated in a meeting of a correspondence group under the United Nations Environment Program / Mediterranean Action Plan (UNEP/MAP) that was held on 29-30 October 2012 inSarajevo, Bosnia-Herzegovina.

It was the first meeting of a correspondence group formed within the context of the implementation of the Ecosystems Approach (EcAp) for the management of human activities and natural resources in theMediterranean. The group consists of UNEP/MAP officers and experts and representatives of the Mediterranean States, the European Commission, REMPEC (Regional Marine Pollution Emergency Response Centre for theMediterranean Sea) and international research projects.

The meeting agenda item was the determination of criteria and methods for the assessment of environmental status in Mediterranean marine ecosystems and the setting of targets for the reduction of the following types of pollution: eutrophication, contaminants, noise and marine litter.

The long-term aim is to achieve a Good Environmental Status (GES) in all regions of theMediterranean Sea, as determined based on specific environmental parameters (indicators) for each type of pollution.

For several indicators, such as chlorophyll, nutrients and contaminants such as lead, existing data of the pollution monitoring program in the Mediterranean (MEDPOL) is going to be enriched, and a target was set for a statistically significant improvement of their levels within the next years.

With respect to the indicators for which data is not available or sufficient, as is the case for marine litter for instance, the group recommended they be included in an integrated monitoring program in the Mediterranean for the collection of the necessary information, in close cooperation with the European Commission and in line with the directions of the Maritime Strategy Framework Directive (MSFD).

During the meeting, the representative of HELMEPA referred to the long-standing cooperation between the Association and UNEP/MAP on the issue of marine litter, presented HELMEPA’s relevant activities and placed the experience and technical knowledge acquired by the Association on the issue at the disposal of Mediterranean states and intergovernmental organizations.

The correspondence group recognised the significant role HELMEPA may play in the monitoring of marine litter in the Mediterranean in the next implementation phase of the EcAp both along coastlines through their voluntary beach clean-up activities and on the sea’s surface with the collation of data from observations made by their member-vessels of floating debris.

The final conclusions of the correspondence group will be submitted at the 18th Conference of the Parties of the Barcelona Convention, which will take place in December 2013 inTurkey.