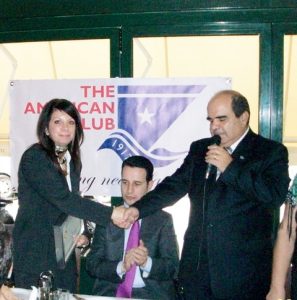 The American P&I Club was honored by UNESCO through its department for Piraeus and the Islands, on Tuesday, October 23, 2012 for its significant Charity Initiative launched earlier this year in connection with the Club’s Posidonia 2012 activities.  The Club, its managers, and individual Board members in light of the difficult times in Greece and as a special thank you to the Greek market support, decided to donate money to three chosen charitable purposes in Greece with connections  to the Maritime Industry.

The Club combined its Posidonia reception this year with a Charity Challenge which motivated its associates in the industry to add to the Club’s collective donation of over Euro 180, 000 resulting in a total donation of a little over euro 220, 000.  One third of this amount was earmarked for feeding needy families through Krikos Zois and the target of 100 families has now reached about 150 families. Representatives of the Management and the Board were honorary guests at a ceremony at a Nikea restaurant, where about half of the families participating in the Club’s project were gathered for a special luncheon and gifts as well as food products were distributed.

This lunch was organized by Krikos Zois and the Club was presented with a tributary plaque in recognition of the significant contribution by The American Club for this project during these difficult times. Mr. Manoritis, President of the Piraeus Department of UNESCO stated that “This donation and project of the American Club injected much needed resources into feeding the needy, usually a part of UNESCO’s purpose and thereby assisted UNESCO to concentrate their scope of assistance on other much larger scale projects needed, such as a permanent outreach center which will not only help those in need but will create jobs.”