Strong interest in Singapore and Rotterdam contracts on  first day of live tradingLondon, 8 November 2012. Freight  Investor Services, one of the world’s leading brokers of freight and commodity  derivatives, is pleased to announce the first trades on the FIS Bunker Screen,   which went live for trading on November 7.

The first trades were made on the two  live contracts, Singapore 180cst and Rotterdam 3.5% Sulphur Barges. Oslo-based  Torvald Klaveness sold the December 2012 contract on Rotterdam 3.5% Sulphur  Barges, while Dubai-based Panacore lifted an offer on the March 2013 Singapore  180cst contract. Both trades were made against the market makers providing live,   firm prices to the FIS Bunker screen.

Panacore Group Chief Executive  Officer Mudit Paliwal said:  “Panacore is very pleased to transact  the first of what we expect to be many trades on the FIS Bunker Screen. It is a  great tool that allows us to rapidly execute in a dynamic business environment  and helps us to expand our business continuously.”

Interest in the screen since launch  has been strong with an average of 20 participants signing up per day. In  response, FIS has expanded its bunker fuel trading team to five. Zoe Upson has  joined Damien King and Ali Ersen on the London bunker desk, while coverage is  provided in Singapore by Darragh Lenihan and in South Korea by Hanhee  Jung.

Zoe Upson, FIS Bunker broker  said: “I’m very excited to be joining the  FIS bunker desk and playing a role as this market develops in a new direction.  The FIS Bunker Screen really does change the game for buyers and sellers of  marine fuel and the interest we have seen so far demonstrates to us that there  is a real appetite for better risk management in this market.”

The FIS Bunker Screen is an expansion  of the collaboration with Cleartrade Exchange (CLTX), which provides the trading  technology to FIS to enable a completely new concept in bunker swap trading.

Cleartrade Exchange has automated the  collection of prices from multiple market-makers and liquidity providers,   through the implementation of price injectors. This provides firm bids and  offers from market participants in tight spreads along six months of the forward  curve on the FIS Screen and anonymously to the CLTX Screen through Direct Market  Access (DMA).

Screen prices move with the market,   reflecting up-to-the-minute changes in prices of the two key bunker fuel  contracts: Singapore 180cst and Rotterdam 3.5% Sulphur Barges, with a third,   Singapore 380cst to follow. Indicative prices on these contracts for a further  three Quarters and four Calendar years are also available. Indicative prices can  also be provided on the US Gulf Coast 3.0% contract.

Bunker fuel prices are fed into the  FIS screen automatically and cash-settled swaps can be executed directly on  screen, with straight through processing to clearing at SGX, NOS and CME and by  voice clearing at ICE.

Trading on the screen requires an FIS  broking agreement and a clearing account with the providers noted above. Users  can sign up for the FIS Bunker screen here: http://www.thecleartrade.com/fis/. 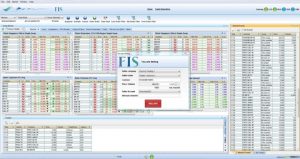 About FIS FIS is a leading provider of impartial and accurate risk  management advice to customers in freight, steel, iron ore and fertilizer  derivative markets and also provides physical commodity and shipbroking  services. Founded in 2002, FIS has enjoyed sustained growth in each year of its  operation and has expanded via its network of trading associates and branch  offices to offer coverage in the United States, China, Singapore, South Korea,   India and Norway. The company is registered and regulated by the Financial  Services Authority (FSA) in UK. Learn more about FIS at: www.freightinvestor.com. Follow us on  Twitter: @freightinvestor LinkedIn: www.linkedin.com/company/freight-investor-services