Three thousand three hundred and five (3, 305) volunteers from one hundred and fourteen (114) cooperating stakeholders from all over Greece participated in this study on marine litter. In total, they cleaned 508km of coastline across seventy five (75) different areas of the country, collecting an aggregate of 14 tons of rubbish. During each of the beach clean-ups, volunteers recorded the items of litter collected in detail on special report cards, effectively contributing to the significant data on the quantity, composition and origins of waste.

These statistics are utilized by HELMEPA in the monitoring of the problem of marine litter in Greece within the context of the European Union’s Marine Strategy. Furthermore, they are forwarded to the U.S. based NGO Ocean Conservancy, which coordinates the campaign across the globe, so that they may be incorporated in their Annual Report which is to be released in April, 2013.

The increased participation of volunteers in Greece in this year’s clean-up campaign, which was 22% higher compared to ICC 2011, is particularly encouraging. During what is a difficult time for our nation, the positive feedback received from local stakeholders, students and the wider public in response to HELMEPA’s call for voluntary action gives hope for a brighter future and a cleaner environment.

The main finding of the study is that recreational activities in the coastal zone continue to be primarily responsible for polluting Greek seas and beaches with litter. Specifically, 28.5% of marine litter comes from coastal activities and recreation, while two out of three litter items (66%) originate from smokers. 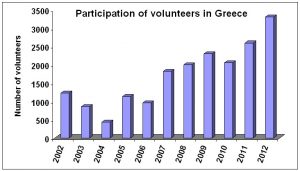 The cigarette end continues to be the most multitudinous item of litter by far along the Greek coastline, while 129, 000 cigarette ends correspond to 6, 450 (!) cigarette packs. What is particularly concerning also is the appearance of many plastic items in the top ten most commonly encountered items of litter on Greek shores.

These data are indicative of the fact that unfortunately, the behaviour of many of our fellow citizens towards the marine and coastal environment of our homeland continues to be irresponsible and characterised by indifference. The time has come for us all to realize that the solution to this problem is in all our hands and it is our duty to once and for all change our poor habits of the past. 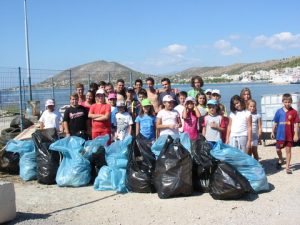 Volunteers at the port of Salamis

The separation and recycling of the litter gathered by volunteers from beaches constituted another important factor in this year’s campaign in Greece. In cooperation with the Hellenic Recovery Recycling Corporation (HE.R.R.Co), a total of 1, 125kg of recyclable material was collected by HE.R.R.Co’s specialised trucks and taken to recycling facilities for appropriate treatment. 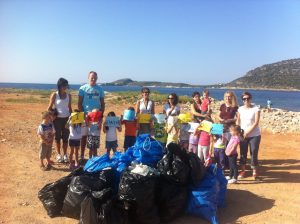 HELMEPA wholeheartedly congratulates all the volunteers for their participation and would like to express its gratitude to all those local stakeholders, School Directorates and companies for their cooperation in the implementation of the activities, as well as HE.R.R.Co, the Department of Marine Environment Protection of the Ministry of Shipping and the Aegean and Kiss FM radio station for their invaluable support. HELMEPA awarded Commemorative Certificates to the coordinators of the activities and to the students who took part in the clean-ups. For further information: HELMEPA’s Environmental Awareness Section, tel. 210-9343088, email environment@helmepa.gr.