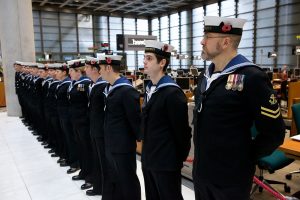 Fri 09 Nov 2012 – Lloyd’s today paid tribute to those who have served as it hosted its annual Remembrance Day ceremony.

At 11am an Underwriting Room full of ex-servicemen, brokers, underwriters and Lloyd’s staff fell silent as the Lutine Bell was struck and a two minute silence observed.

Members of F Company from 7 Rifles infantry regiment brought colour to proceedings as they entered the Room bearing their regimental standard.Their uniformed delegation formed one side of a guard of honour, with Royal Naval Reserves from HMS President on the other.

The 7 Rifles regiment has a long standing connection with Lloyd’s. The regiment is the descendant of the Lloyd’s Platoon London Rifles that many Lloyd’s men joined in 1914-18.   Jon Nelson led the wreath laying ceremony alongside The Lord Mayor of the City of London, Alderman David Wootton. They were followed by Mark Drummond Brady, the Chairman of the Lloyd’s Branch of the Royal British Legion, Sir John Stoddard, Alderman Lime Street Ward, Major Laurie Gomes of F Company, 7 Rifles regiment and Captain Ian McNaught, Deputy Master of Trinity House. 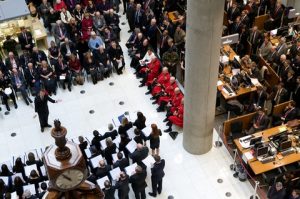 Also in attendance were representatives of Chelsea Pensioners; Far East Prisoner of War Association; War Widows Association; Frimley Park Military Hospital and City of London Cadets. The City of London Army Cadet Force was present to provide assistance to guests.   The Lloyd’s Choir opened the service with the “Ode of Remembrance”, set to music specially composed by choir chairman Brian Bendle. Taken from the poem For the Fallen, written by Robert Laurence Binyon in 1914, the Ode forms a central part of Remembrance services held across Britain every year.