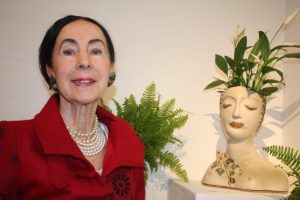 Empty-headed girls!  Well, that was one way of looking at it, and it was the quick-fire description of her latest showpiece work by distinguished ceramicist Elżbieta Marylska-Łuszczewska Stanhope. Viewers beg to differ. Her jardinières – decorative pots for displaying plants and foliage – are no empty vessels but beautiful works of art, each in the shape of a dreamy, romantic feminine bust. In Elżbieta Stanhope’s hands, the shaping of an artefact is as sculptural as it is functional. 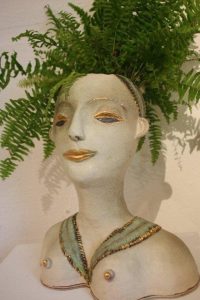 A trio of her fanciful, ornamental urns have been on display among 200 ingenious, sometimes whimsical, and finely-wrought forms at the annual members’ exhibition of London Potters at the Morley Gallery in Westminster Bridge Road, London.

Three was the ideal number for this display, although it has to be said that the terms of the exhibition stipulate three entries from each artist. 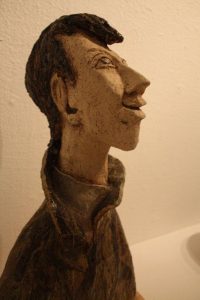 The outstanding quality of creations for the show was a rebuff for anyone who might consign ceramics to the status of secondary art: imaginations are fired as fantastically as is the clay. How audaciously each craftsperson can express their personality through the medium is evident. The immaculately laid out show might have been a world away from the often messy hands-on and -in skill of throwing a pot on the wheel. 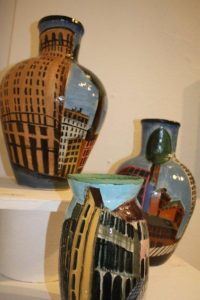 Among the output of Mrs Stanhope are earthenware pieces under the title Sea Pictures, which was inspired by vistas of the Adriatic Sea at a favourite resort, Dubrovnik. The series was reviewed earlier in www.allaboutshipping.co.uk  Since then, her show in the Croatian city this September has been a great success. Born near Warsaw, Mrs Stanhope is a popular member of the Polish community in London. 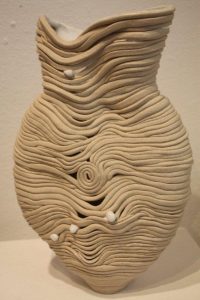 London Potters is a voluntary organisation formed in 1986 uniting professional and amateur ceramicists, and collectors and gallery owners who “share our passion for the wonder of clay.” For expert and nn-expert alike, there was much to enjoy in the range of craft on display. 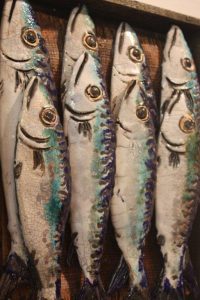 One of the younger exhibitors, Gideon Apfel, was warmly praised by visitors for his vases with New York and Venice designs. Among many other brilliant contributions by makers, Diana Tonnison took for her theme mackerel, bream and red mullet in a fish market, her glaze endowing the scaly sea denizens with an appearance that was remarkably lifelike, or better said, comatose.

Dry or wet, shipping markets are down; the world economy in turmoil and it’s for Obama to make or break…ah! and the Chinese have to deliver too…

Wonderful exhibition! I was amazed by so many beautiful works of art. Thank you to all the artists and thank you to James for writing this article.

Thank you for your kind words and support!I have been a member of the Society for 15 years, and I felt that the variety and standards of the exhibits was better than ever!