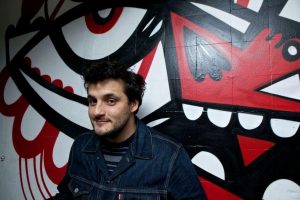 A feast for the eyes – that is the description by Brazilian artist LoRo VeRz of the mural work that he has lavished on the brand new restaurant Coya, located just a few paces from Hyde Park Corner in London. An illustrator, cartoonist and humorist, he was commissioned by restaurateur Arjun Waney to celebrate the spirit of Latin America in designs for the restaurant Coya, which formally opens today November 16.

That he did with gusto, with bold lines, and with vivid colours. In a style that has been described as a fusion of influences from Hieronymus Bosch and street graffiti, and with an overlay of comic book satire, the artist depicts the teeming life of South American far beyond his native São Paulo, invoking cities and sites from Rio de Janeiro to Machu Picchu.

His medium: anything goes, from oil to acrylic to spray can. His method: paint straight on to the walls without preliminary sketches. “The way I work is very organic, meaning that I create as it comes. I never draw before on the wall or canvas.” 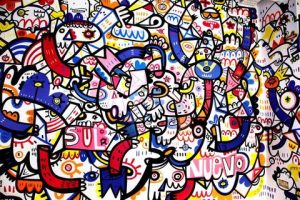 Like many of his contemporaries in site-specific art, LoRo spells his nom de plume with trendy style, but unlike some others never hides away, and he speaks excellent English – he graduated from Central Saint Martins College of Art and Design in 2001. More recently he has received commissions from sports brands including Adidas and Puma.

Mr Waney said of LoRo: “His work is dynamic and unusual. LoRo’s paintings will make the interior as individual as the menu and bring an authenticity from South America.”

A venture capitalist who has increasingly admired contemporary artists,   Mr Waney has a long record of success in investment management and the retail business. In recent years he has switched attention to restaurants in London and overseas, buying several. Just over a year ago, in partnership with property investor Gary Landesberg and film star Gwyneth Paltrow, he acquired the private member Arts Club – founded in 1863 and whose members have included Charles Dickens, Liszt, Leighton, Sickert, Millais, Rodin and Whistler – on Dover Street, spending £10m on refurbishment, plus more money on works of art.

Mr Waney is a strong supporter of the Savitri Waney Charitable Trust, headed by his daughter, which works in rural India and elsewhere on curable blindness and on mother-and-child healthcare.

The new restaurant has pledged to support South American culture in establishing the Coya Collective, which will invite artists, musicians and artisans to play, paint and display works in the restaurant.