Famed for their acumen in covering the most complex risks, both marine and non-marine, underwriters and brokers in the London insurance market rely more than ever on the wisdom and expertise of a cadre of skilled practitioners involved in the production and analysis of wordings and policies. They know that careless or ambiguous drafting can cost them or their clients millions of dollars in law suits over interpretation, or in liability for errors and omissions. 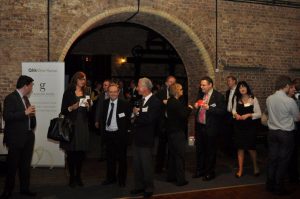 Meeting friends and contacts at the Wordings Specialists’ Gathering

Just once a year the usually modest backroom boys and girls who scrutinise and revise the policy minutiae proudly put themselves in the spotlight, by way of a unique event, the Wordings Specialists’ Gathering. 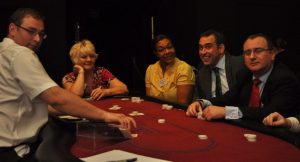 Casino capitalism with imitation money at the Wordings Specialists’ Gathering

The gathering has just celebrated its 20th anniversary in style, with well over 200 attendees from 70 market organisations socialising and networking on November 9 at the capacious City hostelry The Loose Cannon.

Casino first prize. Cliff Stammer of Chaucer receives an iPhone from Vanesa Clucas Martin of Adsensa, donated by her company

Origins of this festivity are in an informal get-together in the early 1990s organised by three wordings specialists for their fellow professionals. Nowadays the event is a stand-out occasion in the London insurance market calendar, and a reminder of the vital role of the wordings specialists whose worth was long overlooked by many senior market figures. After a period in which the average age of the professionals rose to the upper end of the scale, younger people are beginning to enter and shine in the speciality.

Increasingly thoroughgoing market regulation, and agreement on the importance to insurers and clients alike of ‘contract certainty’ up-front has year by year underlined the need for wordings rigour.

The London gathering is an opportunity for relaxed chat between people from wordings departments and representatives from underwriting organisations, brokers, resource and technology providers and law firms.  It is funded entirely by sponsorship, and a volunteer committee spends months spreading the word that all market organisations are welcome. This year the committee won the support of 28 market brands. 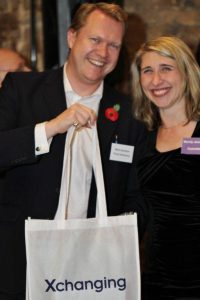 The sponsors provided in various measure the means for games tables with “funny money” and prizes, food and drink; a dance floor and music added to the evening’s atmosphere.

Co-incidentally, the Chartered Institute of Loss Adjusters has just published the result of three years of research in collaboration with the Insurance Institute of London into ‘business Interruption’ policy wordings. The guide, Business Interruption Policy Wordings – Challenges Highlighted by Claims Experience, deals with commonly encountered difficulties in this class of wordings.

A study group, chaired by CILA Fellows Harry Roberts and Damian Glynn, looked at the challenge of demands for contract certainty. Some traditional wordings are unclear and have failed to keep up with business practice, it is said. The authors pointed to what can be wide divergence between the technical meaning of words and what they convey in everyday usage. Whether or not a claim is paid may come down to the insurer’s interpretation of the language rather than what was intended at inception. 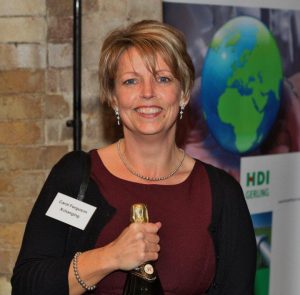 Mr Roberts and Mr Glynn say in the foreword:“Similar claims can end up with different outcomes, depending on the insurer’s interpretation of the policy. At best, this leaves us in the same fog we are in now – still confused, still uncertain. At worst, it can leave customers feeling like they have been treated unfairly, putting all our reputations at risk.”