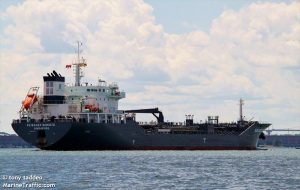 OW Bunker, one of the world’s largest suppliers and traders of marine fuels and lubricants, today announced the launch of a new supply vessel in North America; the 2011-built double-hulled Elisalex Schulte, which will operate offshore in the Gulf of Mexico lightering zones.

The Elisalex Schulte is a 22, 000dwt vessel, which has been taken on a long-term time charter. It is equipped with dedicated tanks to provide complete segregation of low sulphur fuel oil (LSFO) and heavy fuel oil (HFO) and has a pumping rate in excess of 1000mts/hr. This ensures the highest level of quality control, and facilitates the quick supply of bunkers to maximise operational efficiencies for customers.

Operating in international waters off both the Texas and Louisiana coastlines, the vessel will provide an important service for customers, particularly the many tanker fleets transiting the region. By taking products offshore, customers can avoid costly deviations and port calls to other bunkering locations.

“The Elisalex Schulte is a state-of-the-art vessel and the newest operating in the region. Combined with OW Bunker’s industry leading commercial and operational expertise in offshore bunker supply, I am confident that we can provide customers with the very best service, as well as quality products at the best prices and on the best terms, ” said Adrian Tolson, Regional Manager, North America.

OW Bunker is one of the world’s largest suppliers of marine fuel oil and related services. The Group’s core activity is the global sale of bunkers both from its own physical inventories, where it operates over 30 large and small tankers in its global fleet, as well as an intermediary trader. OW Bunker also provides advanced risk management tools and services in an increasingly unpredictable oil market and volatile global economy, and also purchases and sells entire oil cargoes.

The Group is represented in 25 countries world wide, spanning Europe, Middle East, Asia, Africa and the Americas and commands more than 8% of the global bunker market.

Latest from The Nautical Institute on ECDIS