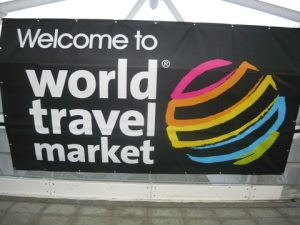 World Travel Market 2012, the leading global event for the travel industry, experienced an overall accumulative 3% increase in visitors with each of the four days attracting more visitors than in 2011.

The first day of WTM 2012 (Monday 5 November) was a resounding success with exhibitor invitation visitors up 5% on last year’s event.

The Monday of WTM is an exhibitor Invite-only day with the aim of allowing exhibitors to hold discussions and negotiations with those buyers that they want to conduct business with.

The Monday morning Speed Networking session was a great success with a record number of both exhibitors (498) and WTM Meridian Club buyers (210) discussing business deals before the exhibition floor opened.

Matt Cheevers Purchasing Director Voyage Prive said: “Speed networking is a perfect way to start World Travel Market. Almost everyone I talked to was relevant, and in this context it is possible to get down to the key points of interest. Making the initial contact at the speed networking makes the follow up easier and more targeted.”

The second day (Tuesday 6 November) experienced a 1% increase on the second day of last year’s event. Tuesday is the busiest day of WTM as it is the first day the event is open to the whole industry following on from the exhibitor-invite only policy on the Monday.

“WTM 2011 facilitated an impressive £1, 653 million in industry deals. I am confident that the increased visitor numbers alongside the success of the Speed Networking events will see WTM 2012 responsible for almost £2, 000 million in travel deals.”

Furthermore, World Travel Market 2013 will be the biggest and best ever with an increased focus on three growth sectors of travel technology, luxury and business travel.

The new look WTM 2013, which takes place between Monday 4 – Thursday 7 November, will see;

“The increased focus on travel technology, luxury and business travel will only increase the business opportunities for both WTM exhibitors and visitors across the four days of WTM 2013.

“Travel technology at WTM has been phenomenally successful over the past few years so it was the natural and obvious progression to give it its own event status.

“The luxury market has ridden the recent global financial downturn better than any other sector and is a growing market around the world. While a high proportion of WTM visitors are interested in business travel, meaning the co-location of Business Travel Market will increase the business potential for exhibitors and visitors from both events.”

RTE is a business unit of Reed Exhibitions. In 2011, six million participants attended RE’s 500 events in 39 countries covering 44 industry sectors from aerospace and aviation to beauty and cosmetics to sports and recreation.

Reed Exhibitions is the world’s leading events organizer, with over 500 events in 39 countries. In 2011 Reed brought together six million active event participants from around the world, generating billions of dollars in business. Today Reed events are held throughout the Americas, Europe, the Middle East, Asia Pacific and Africa and organized by 33 fully staffed offices. Reed Exhibitions serves 44 industry sectors with trade and consumer events and is part of the Reed Elsevier Group plc, a world-leading publisher and information provider and a FTSE 100 company. www.reedexpo.com