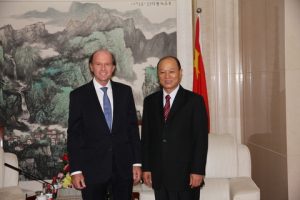 The in-depth discussions covered general shipping and salvage issues and in particular the highly relevant and controversial issue of fair reward for salvors for the benefit their operations confer on the marine environment. Mr Yuan said on behalf ofChinahe was disappointed that the CMI decided not to support changes to the 1989 Salvage Convention. He made clear his support for ISU on the issue and expressed his hope that ISU will be successful in its continuing work on the matter with the Shipowners, P&I Clubs, the ICS and property underwriters.

The minister also indicated thatChinawelcomes further dialogue with ISU on matters of mutual interest. China Rescue and Salvage is also an important member of the ISU. The growth of sea trade withChinahas expanded significantly in the last decade and salvage in Chinese waters is an important issue for salvors. Tsavliris Salvage Group had the pleasure to work inChinarecently on the salvage operation “BET PRINCE” and look forward to continuing developing a good working relationship.

Describing events in Beijing Andreas Tsavliris said: “ISU is disappointed that the CMI Conference did not support its proposals for modest change to the 1989 Salvage Convention. ISU is nevertheless grateful to those countries which did support change. I am also grateful for the kind hospitality and supportive comments fromChina’s Minister of Transport in my meeting with him and we will continue to work to ensure that salvors are properly rewarded and that the framework within which salvage operations are conducted encourages innovation, investment and global readiness to intervene in casualty situations.”