How a UK dealer helped artists left high and dry by the Soviet collapse return to fashion, By James Brewer

Out of fashion – old hat! As the remnants of the Soviet system were swept away, scorn of that nature was poured on what ought to have been recognised as the truly remarkable work of members of the Artists’ Unions in Russia.  Discerning collectors outside the country have since decided positively in favour of the best of this epochal cornucopia. Such admirers prominently include John Barkes, a British dealer who had encountered this fascinating treasury by chance.

Dr Barkes has developed a thriving business based on the output of the prolific studios of the Artists’ Unions of St Petersburg, Yalta and Siberia – work that largely is warmly more personal than that of the well known ‘socialist realist’ style. He finds an enthusiastic reception for the canvases at such venues as the Decorative Fairs at Battersea Park, and on the other side of the world at the specialist Bridget McDonnell Gallery in Melbourne, which in March 2012 featured his finds among its 10th exhibition of Russian paintings.

The artists treat with sympathy workaday scenes, which might be at the dockside, the grain harvest, or flower picking. A seemingly naïve perspective is imbued with deep professionalism. 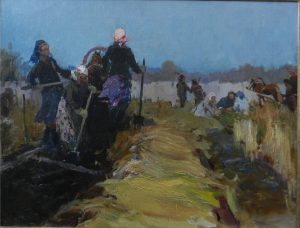 Dr Barkes travels to Russia regularly to keep in touch with gifted artists, most of whom grew up under the Soviet system.

For him, it all began in the late 1980s, when he was offered some pictures by Russians who had come to London for the first time.  The quality was not too good, but the episode prompted Dr Barkes to investigate further.  He did not get much of a response in Moscow, but a chance meeting with the wife of an artist set him firmly on the trail of reliable contacts in St Petersburg. Dr Barkes says that artists were treated well under the old system when elected to a local Artists’ Union. They would be in line for a studio, all the artists’ materials they needed, a salary and an apartment. They were afforded the status that came with doing important work for the state. The price was usually conformity, and the training was rigorous, based on figure drawing, and painting as with the 19th century French atelier system. Students were assigned to one of the senior professors, and would work as a group. The academy archive holds all their successful diploma paintings. When the Soviet system collapsed, these artists were left “high and dry, ” Dr Barkes says. The system of state patronage and of competition for commissions through the Artist Unions, ceased. Members were left their apartments, and sometimes their studios, and had works to sell, but these had become out of fashion. Russians of the new generation dismissed what they had to offer as ‘old hat’.

Their lifeline turned out to be interest from abroad through channels such as the dealership of Dr Barkes. It was not just a question of finished paintings, but of fascinating preparatory sketches. Dr Barkes was told that many of the artists initially resented his interest in their work, but now “I seem to have proved myself with these old timers.”

Rostov-born Evgeni Kazmin is among those attracted by marine themes, for instance his busy depiction of divers playing cards while drying their diving suits in a Sochi harbour packed with merchant ships. Valentina Savelieva, born in what was then known as Leningrad, gives us her view of Dockworkers’ Lunch – vintage 1970 – with labourers shown as strong and resourceful even while at rest.