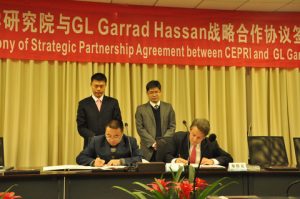 Nanjing/China, Hamburg/Germany, 10 December 2012 – The China Electrical Power Research Institute (CEPRI), and GL Garrad Hassan have signed a memorandum of understanding (MOU) which will see the two organisations establish a strategic cooperation in the area of photovoltaic (PV) inverter measurement and testing. CEPRI’s National Energy solar center (NESC), incorporated into CEPRI in March 2012, will cooperate with GL Garrad Hassan. NESC operates mobile PV testing platforms and is charged with the development of the test standard for PV inverters and PV power stations for China. GL Garrad Hassan is part of the GL Group’s renewables business segment.

Recently, NESC submitted a grid code for PV power stations to the Standardization Administration of China (SAC) and this code is expected be published at the beginning of 2013. As the first event of the strategic cooperation, NESC and GL Garrad Hassan are planning to hold a joint seminar which will introduce manufacturers, institutes and developers to the Chinese and European grid codes, following the publication of the NECS code.

Solar, or PV inverters take the direct current (DC) output of a solar panel or array and convert this output to alternating current (AC), the form of electric power transferred through standard residential and commercial power grids. “PV inverters are critical to expanding the deployment and speeding the integration of solar arrays into national energy grids, ” said Mathias Steck, GL Garrad Hassan Senior Vice President. “Residential and commercial solar systems are one of the fastest growing sectors of the renewable energy market and the increasing numbers of such installations require reliable inverter technology and harmonised standards to enable this growth. By working together with NESC we hope that we can help to speed this process as safely and smoothly as possible, delivering on the benefits that the widespread uptake of solar energy generation promises.”

About NESC National Energy Solar Center (NESC) has been approved by National Energy Administration (NEA) in September 2009, and officially put into operation in July 2010. The center, under the management of the NEA and relevant organizations, has been operated and managed by the State Grid Electric Power Research Institute (SGEPRI) on a day to day basis. Since March 2012, the center, including all staff and qualifications, was incorporated into the China Electric Power Research Institute (CEPRI) www.epri.sgcc.com.cn

GL Garrad Hassan is one of the world’s largest renewable energy consultancies and a recognised technical authority on the subject. It offers independent technical and engineering services, products, and training courses to the onshore and offshore wind, wave, tidal and solar sectors. The renewable energy consultancy currently employs around 1000 staff, in 44 locations, across 26 countries.
For more information on GL Garrad Hassan, please visit www.gl-garradhassan.com