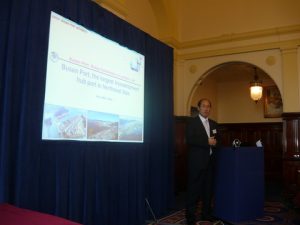 Mr. Lim Ki-track at the podium presenting his speech

Mr Lim Ki-tack, President of the Busan Port Authority presented on the 29th of November at the River Room in The Royal Horsegurads at 2 Whitehall Court* an excellent slides ambitious future plans and figures to the international London media.

Busan Port is the world’s 5th largest container port handling over 16 million TEU in 2011. The port has ambitious plans to become the maritime hub for Northeast Asia and is actively pursuing a range of developments including new port construction, a massive logistics distribution centre and Free Trade Zone, and redevelopment of the old port. It was a meticulously prepared presentation and clearly shows that Mr. Ki-tack has focused to hit his targets. 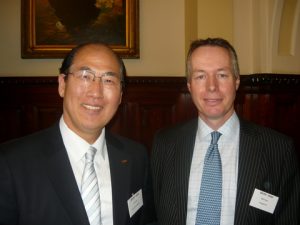 A number of questions followed and afterwards the informal buffet lunch gave both the chance for networking but also to meet Mr. Ki-tack – whom we know from his tenure at the IMO, as well as his very helpful team, amongst them Jin-Sun Shin, director global marketing team, Ho-Seok Kim, manager global marketing team, and Lee Da-Jung member of the same team who answered to our many questions.

Excellent organisation by the shipping events specialist NAVIGATEPR with its director Mike Elsom introducing the event and good to see nearly fifty journalists attending; the venue of course was also at the centre of discussion given that this is the National Liberal Club which was founded back in 1882. Overlooking the Thames with the most splendid terrace in London, the Club remains today completely independent but as the name implies, continues to be closely identified with the historic Liberal traditions and Liberals worldwide. “F”