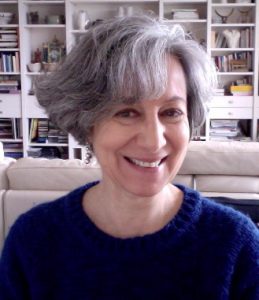 As a designer, potter and painter, London-based Linda Dangoor is very much a hands-on artist. When not in her studio, she is experimenting in the kitchen with Middle Eastern dishes, with the result that she is now the author of a stylish and gastronomically seductive cookery compendium. 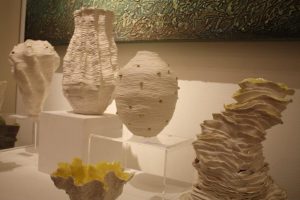 Ceramics and painting by Linda Dangoor

It comes as little surprise to learn that the ingredients for Linda’s versatility stem in large measure from her family origins in a place that was the cross-roads of the ancient trading world for centuries: Mesopotamia, the cradle of empires and of modern Iraq.

With her recently published Flavours of Babylon, modestly described as “a family cookbook, ” she is celebrating the taste of the Middle East, both in the form of traditional recipes, and her own versions. As London has in the past couple of years – in its suburbs at almost every compass point – seen a huge growth of popularity of the cuisine of the Levant, her following should flourish.

Visitors to the Art for Art’s Sakeshow by 10 artists at The Gallery in Cork Street during early December 2012 were able to enjoy a display that included a generous helping of Linda’s multiple talents. Although the gallery provided a fine champagne buffet for the occasion, Linda’s recipes were for the time being confined to the pages of her book, where they are accompanied by tips such as how not to ruin your rice. Thankfully, the once exotic ingredients for her recipes are now available in many supermarkets and Middle Eastern shops in London and other European cities. 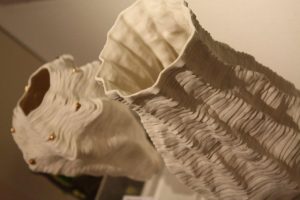 Linda’s book and her artwork serve as a useful reminder of the rich culture that emerged long ago from the territory of her country of birth, Iraq.  Although Linda left Baghdad at the age of 10, to live in Beirut, later in Paris, and for most of her life in London, she is acutely conscious of her precious heritage.

She says that thanks to its geographical position, Mesopotamia was at the crossroads of a key trading route for almost 2, 000 years. As a result, it acquired new spices and products from sources as distant as India and China. More recently, Ottoman rule during almost 400 years left a savoury imprint on the aromatic and deftly flavoured range of food.

In her ceramics and painting, Linda is very much of the contemporary scene, enhanced often in her case by evocative references to the desert landscapes in her native country.

Her diversification from painting to working with clay, which came as “love at first touch, ” resulted in output that exhibits a compelling rhythm: she builds many of her vessels in a series of coils, in flowing but uneven layers. Where matt, the surfaces allow for understated decoration that bestows a special quality on each piece. At the Cork Street show, there was much admiration for pots such as one with the title Ruffles and Pearls, which was of crank (coarse clay) with oxides and glaze applied. 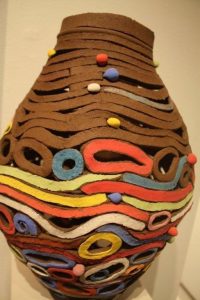 This fascination with materials has been transmitted back into her thickly textured paintings, which liberally embody her own mysterious calligraphy reminiscent of Arabic inscriptions. One large painting is entitled Desert Song, and is composed from pigments and sand on linen.  Several are landscapes with moon, and are of pigments and sand on canvas.  That sand is not just any old sand, but handfuls scooped carefully from trips to the mountains of Spain and from the beaches of the Algarve.

More information is at www.lindadangoor.com