I was inspired to write a poem about one of Britain’s most popular paddle steamers, the historic Kingswear Castle, after an enjoyable trip down the River Medway from Rochester in Kent in the summer of 2011.  I had the poem published in Paddle Wheels, the magazine of the Paddle Steamer Preservation Society.

I was then asked to write a poem about the Medway Queen. Having never seen the vessel, I thought that this would be impossible, but I was briefed on its history, and based the poem on that.  It was subsequently published in Full Ahead, the magazine of the Merchant Navy Association, in 2012.   I belong to a local poetry group in London and have done committee work for a local arts group for more than 20 years. 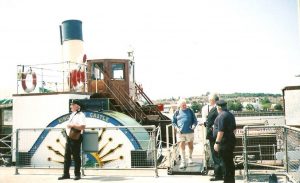 According to the website www.kingswearcastle.co.uk, the coal-fired paddle steamer Kingswear Castle was built in 1924 by Philip & Son of Dartmouth. She sailed up and down the River Dart with her sister ships Totnes Castle and Compton Castle until the 1960s. During World War II, the vessel was chartered to the US Navy to carry stores and personnel at Dartmouth. Withdrawn from service in 1965, Kingswear Castle was laid up at Dartmouth until bought by the Paddle Steamer Preservation Society in 1967. She was moved to the Isle of Wight where she steamed on a couple of occasions for a BBC film with John Betjeman, and in 1971, was towed to the Medway for restoration.

The Medway Queen
Is awakening from her dream.
She helped to keep
Our coastline free
From mines in
The Thames Estuary
Her important task
Was the salvation
0f 7, 000 men at the
Dunkirk evacuation.
She was a passenger
Steamer until 1963,
Sailing from Rochester
To Southend-on-Sea.
Her sailing life stopped
When she sank at Chatham Dock,
Left to rust and decay
To our dismay.
With work carried out
By volunteers,
Her future has become
More clear.
They could only restore her,
Renovate, paint and oil her.
Back to her former glory,
Medway Queen
Will start a brand
New story.
Thanks to her workers
And engineers,
When she’s finally launched,
We can all cry “cheers!”

In 1985, she was returned to service on the Medway with full Department of Transport (later Marine & Coastguard Agency) passenger certificates, and won the National Steam Heritage Award the following year. In 1999 she was listed in the National Historic Ships Committee Core Collection. 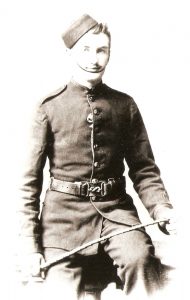 Since her return to service, the Kingswear Castle has carried more than 200, 000 passengers on excursions from Chatham and Rochester and on the Thames.

The Medway Queen was built in 1924 by Ailsa Shipbuilding Company for the New Medway Steam Packet Co, for service between the Medway Towns and Southend-on-Sea. Gaining the title Heroine of Dunkirk, she saw active service between 1939 and 1945 with her finest moment in 1940 when the ship made seven crossings to the beaches of Dunkirk to rescue 7, 000 British and French troops.

The Medway Queen Preservation Society, with the support of the EU Regional Development Fund and the Heritage Lottery Fund, has set up an apprentice training workshop where the restoration will be completed. The rebuild of the hull is being done in Albion dock yard, Bristol, adjacent to the SS Great Britain.

My interest in boats and shipping, and travel, may well stem from the fact that my grandfather was a steward for P&O liners in the early 1900s.  Fortunately, he was not chosen for the Titanic, nor for the Lusitania! He sailed to New York, Madeira, Sardinia, the Far East and New Zealand.  When war broke out in 1914, he left that occupation for administrative work in London.

My great grandfather on the other side of the family was a merchant seaman, and would also have travelled the world.

My taste for travel developed from an early age, as a result of summer holidays with my parents in Kent, Sussex, the Isle of Wight and Devon, with the highlight a flight to Jersey. A school winter holiday to Austria by ferry and rail was especially exciting.

I studied to become a secretary and found a job with a travel agency, where I became a travel consultant.

I continue to enjoy travel and outings, having visited Austria, then Italy, Germany, France, Morocco, Gibraltar, Holland and Belgium.

Kingswear Castle is making headway
On its journey down the Medway.
Wind is gusting through our hair
Blowing away all our care.
The sun shining down on everyone
Enjoying the afternoon fun.
Our captain is in charge as
We pass a submarine and barge,
A wharf with stocks of wood
From the Baltic;
Reaching Chatham, we make the
Return trip.
Back upstream to Rochester Pier
We finish our journey on the Kingswear;
A paddle steamer built in 1924
With wooden varnished seats
And floor.
The smoking funnel and mast
Evoke memories from
The past.
Its bell and highly polished brass
Make this vessel simply first class!

An Italian ambassador for the avant-garde returns to London: Whitechapel Gallery opens its latest exhibition