All on stage at the conclusion of the proceedings

On Friday, 14th December, the 19th Board of Representatives of the “HELMEPA Junior” program that was implemented during the 2011-2012 school year, convened in Athens. The Board was comprised of thirteen children-members, aged between 5 and 13, who were the Leaders of those Groups that had been the most active of the Program and heralded from the following areas:  Agios Nikolaos in Crete, Agrinio, Alexandroupolis, Athens, Chios, Corfu, Exaplatanos in Pella, Gargaliani, Kalamata, Klimatia in Ioannina, Rhodes, Vagia in Viotia and Volos. A total of 4, 454 children voluntarily participated in the program. 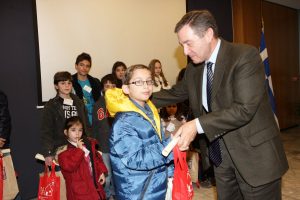 The young students convened at HELMEPA’s permanent Environmental Exhibition, which is housed on the premises of member-company Costamare Shipping Co. Following an exchange of experiences and a discussion of their proposals, the children elected 11-year-old Athanassia Gika from Alexandroupolis as the Board’s Chairperson, 12-year-old Katerina Sidiroglou from Kallimasia on Chios as Vice-Chairperson and Constantinos Skafidas, 9 years of age from Volos as Secretary. They also announced their message addressed to the adult Greek community:

“All you adults who have the power to change somethings, please reduce your waste, recycle and urge others around you to protect the environment. How would you like it if YOU lived in a house full of garbage?” 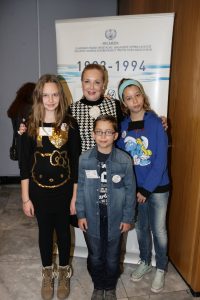 While the meeting of the junior Board was in progress, the children’s parents together with the volunteer teachers who had accompanied them and the Regional Schools Activities Coordinators of the areas in which the program operated, had the opportunity to attend a special presentation on HELMEPA’s continuing environmental efforts. On behalf of the late Captain Vassilis C. Constantakopoulos’s family, his son Achilleas saluted the event. In welcoming the guests, he spoke about the legacy his father left behind for the raising of environmental consciousness among young children adding that Costamare will continue to support this commendable effort. Thanking the Constantakopoulos family for its contribution to the “HELMEPA Junior” Program, the Chairman of the Board, Dr. John Coustas, made reference to the fields of HELMEPA’s environmental activity and the decision to further enhance these. 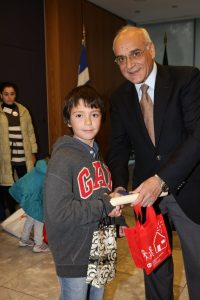 HELMEPA’s Executive Coordinator, Ms Christiana Prekezes, opened the presentation by delivering a message recently received by the Association from the International Maritime Organization’s (IMO) Secretary-General, Mr. Koji Sekimizu, on the occasion of a new HELMEPA maritime publication to mark its 30th Anniversary. Saluting the 30 year-long close collaboration between HELMEPA and IMO in the fields of shipping and the environment, Mr. Sekimizu stressed that he is looking forward to the further strengthening of this synergy aiming at the sustainable development of shipping.

The activities of the “HELMEPA Junior” program in relation to marine litter were presented by Ms Maria Ktistakis, a member of the Environmental Awareness Section. Following, video footage produced by the children themselves was screened along with highlights from the visit of the Marine Environment and Sciences Awareness Campaign to the city of Kavala. 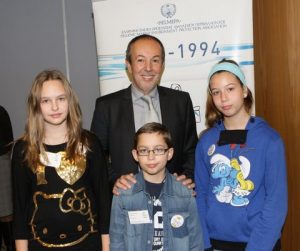 HELMEPA Board Chairman Dr. John Coustas with the newly-elected Junior Board of Representatives

Teacher Ms Maria Kalaitzidou then presented her experiences gained from the implementation of the Program in a school for children with special educational needs at Exaplatanos in Pella. She also described how the Program benefited the children.Taking the floor, the General Secretary of HELMEPA’s Board, Mr. Dimitris Lemonidis, spoke about the warm welcome reserved by local regional communities for initiatives such as those undertaken by HELMEPA in the city of Kavala, in which he himself also participated. 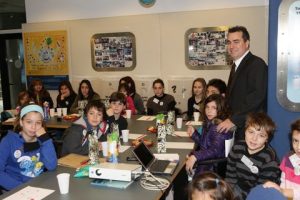 Achilleas Constantakopoulos with the Junior Board

The event drew to a close with the awarding of commemorative certificates to the children and their teachers by the Chairman and the General Secretary, Board members Captain Iakovos Perantinos and Ms. Eirini Daifa and the Director General of Costamare, Diamantis Manos. All the guests then partook of a luncheon offered by Costamare company. 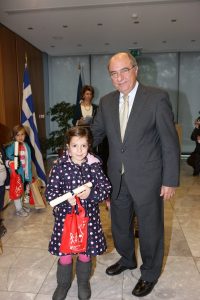