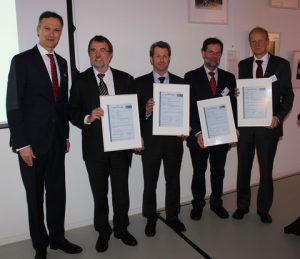 Hamburg/Germany, 18 December 2012 – The message from the speakers at classification society Germanischer Lloyd’s GasPax forum was clear: “If you are ready to order it, we are ready to build it!” The event was held to celebrate the completion of the GasPax project and award approval in principle certificates, the culmination of several years of work from the partners focused on developing designs for LNG fuelled passenger vessels.

Sponsored by the German government, GasPax was designed to get German ship yards and manufacturers ahead of the game on LNG fuelled vessels. The project partners set out to examine the technical challenges associated with use of the fuel in three types of passenger vessels: a cruise ship, a mega yacht, and a roll on roll off passenger ferry (RoPax), and to come up with ready for market designs. The forum was organised and chaired by GL’s Hans-Günther Albers and drew a full house at Hamburg Hafen City’s 25hours hotel.

LNG is already a well established fuel in the ferry industry in Norway, with a growing infrastructure and uptake from many of the operators. Rolf Nagel, from Flensburger Schiffbau-Gesellschaft, presented their RoPax design for a dual fuel, 199m vessel, with capacity for 600 passengers. Utilising LNG requires making tradeoffs due to the size of the tanks, Mr Nagel said, but the design worked to minimise the impact on the cargo hold, engine room and endurance of the vessel. The 585m3 type C bilobe tank, gave the vessel a one week bunkering cycle, but resulted in the loss of 25 lane meters of vehicle capacity and 5000 nm of endurance.

Although passenger ferries are not yet subject to the incoming EEDI (energy efficiency design index) regulations, Mr Nagel, pointed out that LNG enjoyed a significant advantage over fuel oil in the formula’s conversion factor – some 26% in attained EEDI. In a detailed examination of the environmental advantages and financial costs associated with LNG use, Mr Nagel said the extra costs associated with an LNG installation had a payback time of 1.5 to 2 years, but that furthermore the external costs associated with LNG in terms of reduced emissions to air were much lower than conventional fuels – an important factor when looking ahead to an increasing stringent regulatory environment.

The cruise industry is also likely to be moving toward LNG, with newbuildings planned for the very near future. With a North American emissions control area soon to enter into force, LNG offers cruise lines the benefits of a cleaner fuel both in protected marine environments and during port visits. Gerhard Untiedt, Meyer Werft, presented a mid sized cruise ship design, with dual fuel engines and a passenger capacity of 2000. The two 618m3 tanks would enable the vessel to undertake a typical one week cruise running on LNG alone, he said.

In contrast to the cruise ship and RoPax designs the mega yacht from Lürssen shipyard, used vertically positioned tanks: two 180m3 type C tanks situated amidships, in front of the engine room with a cofferdam between and behind the accommodation. Lürssen’s Dr. Bernhard Urban laid out the concept and presented the detailed results of the CFD-analysis of gas flow in engine room.

The concept was designed around the conversion of an existing 110m, 3600t, motor yacht. To accommodate the tanks and the gas handling system, the vessel would be lengthened almost 8m and widened 1m. The dual fuel system is designed to ensure that the owners of the yacht enjoy the same flexibility and usability of the conventional fuel design. The vessel can run on LNG for 2000 – 3000nm on gas with a total range of 6000nm between bunkering, with the same engine power.

The gas fuel systems in all of the GasPax project’s designs were designed by TGE Marine Gas Engineering. Mr Hans-Christian Haarmann-Kühn examined the fuel gas systems, presenting the variety of solutions which are available to different ship types. Existing Norwegian ferries had opted for a standardized tank design, with a highly efficient vacuum tank operating at 6-8 bar, with 8-10 bar pressure within the tank itself, he said. This was a potential solution for tanks of up to 1000m3 he suggested, but the layout of the system meant that such a design would not fit within every vessel configuration.

All of the LNG containment systems used by LNG carriers today could be used as fuel storage under the current regulations, Mr Haarmann-Kühn said, from small high pressure tanks up to the massive 50, 000 m3 membrane tanks – a theoretical possibility for the largest container vessels. The type C tanks used in the GasPax designs, however, had the advantage of being considered inherently safe under the IGC code, he noted, and cylindrical type C tanks at 8 bar pressure could hold up to 3500m3.

Bunkering remains a key area for the more widespread deployment of LNG as a ship fuel and GL has also been active in the concurrently running BunGas project. The hose connections and procedures for bunkering conventional fuels have, until recently, remained relatively ad hoc, with a wide variety of individual manufacturers providing incompatible connections which require multiple adapters. LNG’s far more stringent handling requirements means that finding an optimal solution, one which enables the daily operation of the ship type to proceed as they would conventionally, while ensuring safety, is essential.

An overview of the growing bunkering infrastructure and the continuing development of safety standards and guidelines was offered by Henning Pewe, GL’s Lead for Gas Technology. Although no import terminals with the facility for small scale LNG distribution existed in Asia as yet, he said, there were already plans for a LNG bunker facility in Singapore and by 2015 more were expected to be in place. At the same time work was continuing on developing ship connectors for bunkering, training standards for crew and analysis of required procedures and regulatory safeguards for harbours.

GL’s Dr Pierre C Sames, Head of Research and Rule Development, presented the four project partners with approval in principle certificates for their designs. An approval in principle recognises the technical feasibility of the design and he noted that the presentations of the certificates showed once again that there were market ready designs for owners really to take the next step and move to LNG.

Germanischer Lloyd (GL) offers classification services of plan approval, inspection and certification of materials and components as well as technical assessments of ships in service. GL is committed to a smarter, safer and greener future of shipping. With its “Maritime Solutions” business unit, GL supports customers around the world through software solutions, management systems certification and training as well as consulting and engineering services that are provided by FutureShip. GL’s experts serve as advisors to governments, the IMO, flag and port states.

GL’s fleet in service has grown to more than 8, 000 vessels worldwide, exceeding 100 million GT. GL is part of the GL Group which offers consultancy and certification services for the oil and gas industry as well as renewable energies. www.gl-group.com