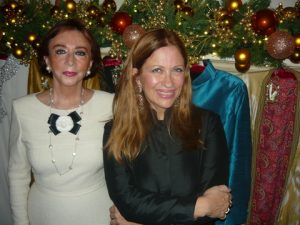 Chryanthi P. Lemos with Calliope in front of her creations

The Greek mind, irrespective of the situation in Greece or in the world’s poor financial markets, is always innovative and productive, fashion being over the last thirty years a field Greeks thrive too – shipping and tourism though being the spearhead of Greece’s global success.Many acclaimed Greek fashion designers such as Sophia Kokosalaki, Mary Katrantzou, Athena Andreadis, Stepfan Caras, Marios Schwab Jean Desses, Yiannis Evangelides, James Galanos, Dimis Kritsas, George Stavropoulos,  Yiannis Tseklenis, and many others have spearheaded Greece’s tradition in fashion over three millennia, as well as in modern times, today! The latest up and coming is Calliope, a unique photographer, who celebrated in London’s Home House at Portman Square last Sunday the 16th of December her new venture ‘QueenCalliope’. This was one day show of her bohemian chic brand which included accessories, bags, headscarfs for both men and women. The event was sponsored by Nicholas Zompos and attracted many London Greeks, including of course members of the shipping fraternity. Life Action Trust members where there too supporting any Greek creation to all intents and purposes. 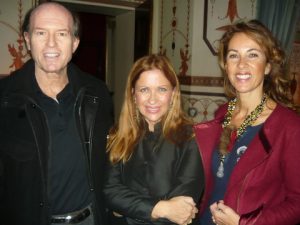 Calliope with Andreas and Milena Tsavliris

As mentioned above the Greeks marvel in fashion too, as fashion like shipping is in the Greeks DNA!  I have to remind you, with all due respect, but the world of fashion has “copied” the Greeks. Remember Philip Howards article in The Times a decade ago under the title: “Ancient potters shaped ideal woman”? Worth bringing you once again the first paragraph: “The ideal woman of films and magazines, a big breasted provider of creature comforts, could have stepped off an ancient Greek vase.” In the report, there are also two pictures, one with the original image on a Greek vase and another with the Hollywood image: Jane Russell in The Outlaw. I leave the comments to you… but hope you too can obtain the copy and read the real thing! And if you see ancient Greek Tragedies and compare them say with the sixties fashion, then you will see the origins of the fashion revolution from clothes to shoes to accessories! Our site favours fashion, business fashion in particular in its entirety, and you can log on the various articles writtten, as well as the fashionality.gr site. 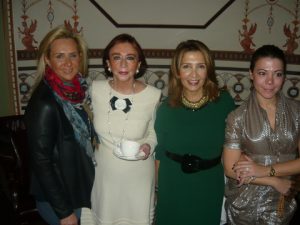 Art Director Panagiotis Noiifelt in a rare appearence in London was there too, as well as Michael and Miriam Baxevanis, Maria M. Hadjipateras, Calliope H. Hadjipateras, her father Panagiotis Lemos, Anthipi N. Lemos, Andreas and Milena Tsavliris, Sophia Konstantopoulou, Depi Mavropoulou and many others.

Amongst the various accessories spotted one of Calliope’s unique photographic work: the Book  photography of tradittional costumes of the Lykion ton Ellinidon by Fereniki publications; Good luck Calliope!

Lloyd’s Registrer continues the tradition of the Festive Season