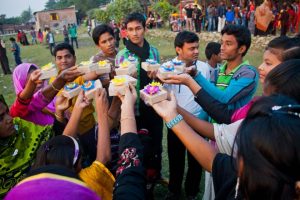 Brussels, 1 January 2013 – At least 15 workers died in 2012 on or around end-of-life ships that were beached in Bangladesh for breaking, according to data gathered by the NGO Shipbreaking Platform, a global coalition of 18 human rights, labour rights and environmental organisations. Every year, shipbreaking workers in Chittagong, Bangladesh, honour the people who died while working on the dismantling of end-of-life ships by holding a candle ceremony attended by the workers, their families, trade unions and local NGOs.

One of the honoured workers is 16-year-old Khorshed Alam, who was crushed to death on July 17 when a metal plate fell on him. The boy had left school to start working in the yards and support his family. He worked a 12-hour night shift at the SRS shipbreaking yard in Chittagong for 25 USD cents an hour, or just under 3 USD per day. Last year, 15 shipbreaking workers had died in Bangladesh, while 12 died in 2010.

“The causes of accidents in the yards are manyfold: the lack of workers‘ training, the absence of Personal Protective Equipment (PPE), the lack of skilled supervisors such as marine engineers, the risky manual process of cutting and loading, the lack of compliance with and respect of the law, and the beaching method, “ says Muhammad Ali Shahin, the Platform’s Project coordinator in Bangladesh. “Only by enforcing the law on workers safety and by pre-cleaning ships will we move shipbreaking away from the beaches and prevent these dramatic deaths.“

The real number of casualties and severe accidents is unknown as the incidents are not documented properly. Also, later illnesses and deaths caused by the exposure to toxics are even more difficult to track as workers are often not registered and migrate within the country.

With India and Pakistan, Bangladesh is home to one of the world’s largest and most dangerous shipbreaking industries. Every year, out of about 1, 000 ocean-going ships sold for recycling, 70% end up on the beaches of South Asia, where they are cut by thousands of poorly trained and equipped workers using blow torches. Shipbreaking workers are exposed daily to toxic fumes, the risk of falling from the ship or being crushed by a falling plate. In 2011, the government of Bangladesh closed the beaches of Chittagong for a few months following a series of deadly accidents.

“Shipbreaking remains one of the most dangerous jobs worldwide, ” says Patrizia Heidegger, Executive Director of the NGO Shipbreaking Platform, “even if there have been some slight improvements on the ground, the number of deaths, accidents and illnesses in the shipbreaking yards remains alarmingly high. We call upon the shipowning and the shipbreaking countries to make these jobs safe and clean, both for the workers and the environment.”

The NGO Shipbreaking Platform is currently working with the European Parliament and the European Council to strengthen an upcoming EU regulation on ship recycling. About 40% of the world’s commercial fleet is owned by EU-based shipowners, therefore making the EU an important player to bring change to the shipbreaking issue.