Katharina Stanzel has likened her selection as WISTA (Women’s International Shipping & Trading Association) Global Personality of the Year to winning an Oscar. She said: “It is the experience of a lifetime.” Ms Stanzel was speaking after formally receiving the award at a special ceremony at the London headquarters of the International Maritime Organization. Managing director of the independent tanker owners’ association Intertanko,   she was chosen for the 2012 accolade at the WISTA International Conference in Paris in October, having been nominated by WISTA-UK after winning its UK 2012 Personality of the Year award. 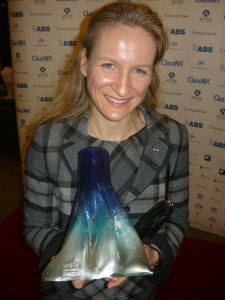 Her industry work was highly praised during the IMO event by speakers including IMO Secretary General Koji Sekimizu, and the UK shipping minister Stephen Hammond. Many other shipping industry figures including members and supporters of WISTA-UK, which organised the event, added their congratulations.

Mr Sekimizu described the presentation as a very important event for the shipping industry. He referred to IMO’s promotion of gender equality in the industry, which had not been an easy task. Shipping historically was male dominated. “We have been making a concerted effort to help shipping move on and women achieve representation within this very dynamic, important industry. There can be no doubt that considerable progress has been made: I only have to look at the increasing number of female faces in IMO and at committee meetings. There are undoubtedly more and more women working in policymaking, regulation, management and promotion of shipping.” Mr Sekimizu added: “More women are also making their way into seafaring careers although this remains a fairly difficult sector. I am sure that in the future we shall see more and more female seafarers on board.”

The Secretary General said that WISTA, which began in the 1970s on a small scale in London, was now a truly internatio

nal organisation. WISTA was recognised and respected throughout the shipping world, and that is why the Personality of the Year Award carried so much significance.

Mr Hammond, who was appointed Parliamentary Under-Secretary of State for Transport in September 2012, said he intended to be an evangelist for the industry, which was vital for our success and our future prosperity. “That makes this association [WISTA] so important.” He said: “I am delighted that WISTA is doing such a good job.”

Citing the growing contribution of shipping and its legal, insurance and other services to the British economy, the minister pledged the government to continue to support the UK tonnage tax regime and the country’s role in maritime services. He noted the progress of women in seafaring jobs – they qualified for five deck certificates in 1998, and last year the figure was 57 – and welcomed the Energy Efficiency Design Index which aims to improve fuel efficiency of ships and reduce CO2 emissions. Mr Hammond said that maritime piracy was still a major concern and the seafarers who are being held must not be forgotten, and he insisted that only maritime security companies of high quality should be engaged to assist. Other issues he would examine included the European Commission plan for a reduction in fuel sulphur content to 0.1% from 2015 on northern European short sea routes, which roll-on/roll-off operators fear will entail costly investments to their disadvantage against competitors. Suzanne Williams, the maritime hostage negotiator who won the WISTA International and UK Personality Awards in 2010, commended Ms Stanzel who, she said, had one of the most prominent posts in the industry, and huge responsibility, as managing director of Intertanko.

Ms Williams said that Ms Stanzel displayed all the characteristics sought from those who merited the Personality accolade: knowledge of the industry, open minded, fostering diversity, and having made significant achievements. “Katharina does not just tick the boxes, she almost fills the boxes, ” said Ms Williams. “She speaks five languages and in all of the languages it is ‘Yes and Can Do!’ 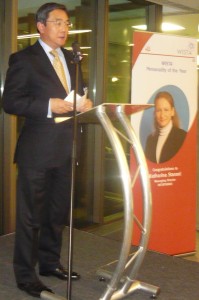 “She is a very environmentally ‘green’ person and has led Intertanko in its first five-year environmental strategy, making the sea a lot safer for all of us in the industry.” Ms Stanzel said that she felt humbled for having been invited and selected for the honour. “It is the experience of a lifetime. It is like winning an Oscar.” She went on: “In shipping, I learn something every day, just by talking to and listening to colleagues.”

Ms Stanzel said that very few people in the industry worked in the jobs they were first trained for, and she had started off being a marine biologist and aiming to work for the European Space Agency. Her move to the world of shipping was “a career that no-one could have charted.”

People in the industry were “incredibly privileged to have our own United Nations body looking after shipping, ” said the Intertanko director. Having followed the work of IMO for many years, she believed that  “the people who put their energy into it, sitting here drafting until three in the morning and making sure regulations are being developed that are enforceable, ” made a big difference.

Looking back to the age of sail, said Ms Stanzel, at the prow of every single ship was the figurehead of a woman.  Women were showing the way “long before we got certificates for doing so!”

Ms Stanzel has a keen interest in environmental matters: in her earlier career with maritime industry bodies ITOPF and IOPC, she was responsible for handling ship source pollution incidents including those linked to the Erika and Prestige casualties. In 2012 Kathi Stanzel was unanimously voted as the fifth managing director of Intertanko since its establishment in 1970, and she is the first woman to take this post. She speaks English, German, French, Spanish, Portuguese and Bahasa Indonesia.

Winding up the formal proceedings at the IMO evening, WISTA-UK president Maria Dixon expressed pride that the IMO “has played a pivotal role in the development of our association; we have had the support of the IMO and their Secretaries General for over a decade, ” including welcoming in its halls the WISTA International 2009 conference.

She said: “Katharina in her own right is an ambassador for WISTA, but also she represents all of us in our efforts to succeed as professionals as well as learn how to balance with the best results the two loves of our lives: shipping and family.”

Ms Dixon continued: “Our members work in all sectors of the industry, legal, finance, governments, technical, recruitment, navy, and so on. Our difference is… well, in fact that we are not different to any other business association, except that we are a group of professionals totally devoted to the shipping industry and this is perhaps the secret formula that has kept us going for nearly four decades. She expressed thanks to the sponsors of the event at the IMO which included ClassNK, American Bureau of Shipping, Pole Star, Steamship Insurance Management Services and Actus International Security.

Women’s International Shipping & Trading Association (WISTA) is an international organisation for women in management positions involved in the maritime transportation business and related trades worldwide. It is a major player in attracting more women to the industry and in supporting women in management positions. With networking, education and mentoring in focus, WISTA seeks to enhance members’ competence and empower career success.  WISTA is growing and currently counts over 1.600 individual members in 34 National WISTA Associations. WISTA-UK was founded in 1974 and is the oldest of the WISTA National associations.

* a brief note about Katharina Stanzel

Katharina holds one of the most responsible positions in the industry, as spokesperson for Intertanko in her role as managing director.In 2012 Katharina was unanimously voted as the fifth managing director since the association was founded in 1970. She is the first woman to take this post, which requires great expertise combined with diplomacy – the perfect platform for an environmentalist.

In her 12 years with ITOPF and IOPC, she was responsible for handling many ship source pollution incidents including the Erika and Prestige. Her offshore research along the coast of Indonesia resulted in the establishment of the country’s first national marine park, the Bunaken Park.

Katharina is a woman of action: she has survived an attack by pirates who boarded her ship out in the ocean, has worked as a bomb disposal specialist in Algeria, and is a qualified diving instructor. She recently challenged her fear of flying by taking up paragliding and is now an enthusiast.

She is a highly educated and qualified scientist and environmentalist having studied in Germany, Australia and the UK, majoring in marine biology and coastal management. She is conscious that women have traditionally been underrepresented in the area of science, technology, engineering and maths.   Katharina champions the maritime industry as a regular speaker to both undergraduates and industry professionals.   She is dedicated to diversity and demonstrates this by her involvement in and commitment to equality steering committees. It was the truly global and diverse nature of the maritime industry that was an attraction to her as a student. Katharina is an accomplished linguist, speaking English, German, French, Spanish, Portuguese and Indonesian Bahasa.

Katharina extolls something different, a new breed, a pioneer; she represents the future. The Maritime industry is the foundation of global commerce and transport and with it this carries great responsibility. It is an inescapable and sad truth that that the environment and its resources is reaching a critical state. It is her passion and sense of urgency that will reach past the maritime industry.