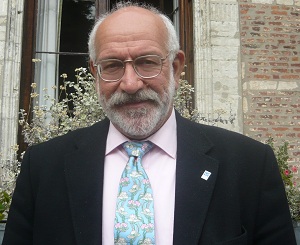 The following are the main points from the latest John Faraclas  live interview to Panos Thomakos on SBC TV last Friday the 18th of January 2013:

1. Following a video from  Moundreas Shipbrokers on the latest market situ, Thomakos asked how challenging is the advancement of the Greeks in the sphere of global shipping and requested for a position statement. Faraclas countered in an agreeable mood that this video is more than important, urging all three hundred MP’s in the Greek Parliament to seize the moment and understand the importance of Greek Shipping in Greece’s economy and beyond! He stressed the fact that Greece’s supremacy and uniqueness in the Shipping industry is appropriately mentioned in Plato’s Republic – the famous eight-page passage on the argument between the Philosopher – King and the King – Philosopher, and explained the definition of the shipowner. He further said that the market is not exactly as per the video, as China has returned to the 1999 period and its development is on a single and not double figure.

2. He reiterated his past views that there are three main issues affecting the markets: Geopolitical, Economical – reminding the famous American expression: “it’s the economy stupid” and the Energy jargon. Elaborating further he said; “Who has the upper hand in tankers?”  “Who really controls the tankers?”. “The Arctic Oil is one of the most important issues and Putin has set the record straight. Russian, Canadian, Finish, Norwegian, American (Alaska) and other regional interest will be embroiled in this new energy game, and many countries with Japan at the helm will be able to receive faster the chap oil from the Arctic region, thus sending a message to the Middle East that its situation cannot be further tolerated… Faraclas has in the past – in writing , demanded the closure of the Middle East region given the troubles in the area…. Thomakos agreed reminding Faraclas’ previous reference for the introduction of the Natural Gas! He ended by saying that everything changes and those who don’t adjust with the new world business order commands and demands, they better have a Scottish Shower!

3. He then briefly analysed the BDI saying that he BDI’s 77 plus points – from 760 to 837 – is something positive although it’s early days. Only when we see 2, 000 plus then we can start talking about a different and more promising freight market!  He also said that even new ships might end up for demolition, explaining how this “works”, given past experiences. He also referred to tramp and liner shipping and where the danger lies. In this special on the explained the age factor too. “Availability of cargoes and freights are the only ingredients for continuation in the industry”. Faraclas having predicted the shipping markets right – a very difficult task, said its dangerous for the shipbroking community to make predictions as all have failed and same were/are detrimental for the shipowners. “They should abstain in saying the future of the markets as they will destroy many owners!”

4. The issue of competiveness and that of taxation was appropriately discussed with Faraclas reiterating that it was the Law 89/67 that enhanced Greek Shipping in its entirety.  Faraclas pointed out that the current government’s new tax laws are  ridiculous given other countries’ favourable shipping tax system – including those in the EU! If Greece wishes to retain the 500, 000 jobs deriving directly and/or indirectly via shipping and maintaining the number one position in the shipping world, they should abandon here and now these morons’ actions! Law 89/67 gave an end to the short of to say Flags of Convenience or as Faraclas said Flags of Necessity Thomakos “questioned” if during the junta period there were good laws…! Faraclas said that the Greek shipowners are the world’s shipyards best clients and they have even built vessels to red hot communist countries (then called socialist republics) like no other shipping nation – against of course Greece’s shipbuilding industry’s  interests and advantage!

5) Moreover Thomakos said that decisions should be taken Democratically and Faraclas agreed but countered that Democracy is deprived and has been downgraded into a “coffee shop” discussion… The Golden Age of Pericles, Democracy was there, it existed, not today!

6) Lastly the remaining weekly issues Faraclas mentioned the WISTA Award to INTERTANKOS’ Katharina Stanzel at the IMO as Personality of the Year and the importance of women in the shipping industry urging the Greek MP’s to pay attention to the contribution of women in Shipping as well as to all Greeks. Thomakos mentioned Mrs. (Angeliki) Frangou  and Faraclas agreed of womens’  success adding that “we should remind you of Jennie Pournara-Bardavilias with her Bouboulina Shipping in the 70’s and her continuous participation until today to many shipping developments, as well as all Greek WISTA and International WISTAs! She was until recently the vice-president to of WISTA-Hellas”. He ended by saying that “… in Greece we don’t pay the respective attention and respect to Women and they should proportionally  participate both in Parliament as well as Ministers in any Greek Administration”. The issue of Coastal Greek Shipping should ne shorted one way or another at the best and most efficient way to the benefit of all, as otherwise it will be hell!