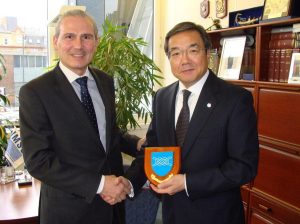 Capt Esteban Pacha, Director General of IMSO and Mr Koji Sekimizu, Secretary General of IMO
during his visit to IMSO Headquarters on 28 January 2013

The IMSO Director General, Captain Esteban Pacha-Vicente, today announced that Mr Koji Sekimizu, the Secretary-General of the International Maritime Organization (IMO) visited IMSO Headquarters on 28 January 2013. The purpose of the visit was to discuss matters of mutual interest, in particular in the field of the future of maritime communications and how new technologies would support the sustainability of the maritime sector.

An Agreement of Cooperation has existed between the two Organizations since May 1982, revised following the privatization of Inmarsat in 1999. IMSO and IMO enjoy reciprocal observer status at the meetings of each Organization, and exchange information on their activities and programmes of work in the field of maritime communications for maritime safety and efficiency of navigation.
Mr Sekimizu also met the Executive Chairman of Inmarsat, Mr Andy Sukawaty, and visited the Inmarsat Satellite Control Centre.
Captain Pacha-Vicente said “IMSO is honoured to receive Mr Sekimizu on his first visit to IMSO in his capacity as the IMO Secretary-General, although he has in the past attended many IMSO meetings. The working relationship between IMSO and IMO is most important as it recognizes the crucial role that GMDSS plays in the safety of life at sea, and the important improvement that its modernization over the next few years will bring to shipping. In addition, as LRIT Coordinator, IMSO continues to work closely with IMO in ensuring the system is efficiently implemented and fits the purpose for which it was created.

Mr Sekimizu said “my formal visit to IMSO today reflects the strong sense of co-operation between the Heads of two Organizations and our exchange of views about a number of issues surrounding satellite communications for ships reconfirmed the established value of our partnership which is fundamental to the activities of both Organizations to maintain sound legal and administrative frameworks for sustainable shipping.”