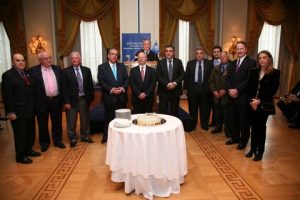 Athens, Greece: Last Sunday the 27th January 2013, the traditional New Year Vassilopitta cutting ceremony was celebrated at the Grande Bretagne Hotel with more than 130 distinguished guests and members of the International Propeller Club of the United States, International Port of Piraeus. The ceremony was honoured by the presence of Minister of Shipping, Maritime Affairs and the Aegean, Mr. Kostis Moussouroulis and H.E., Ambassador of the United States in Greece, Daniel Bennett Smith.

In the absence of the President Antonis D. Faraklas due to his business trip in China, Secretary General of the Propeller Club,   Theodoros Kontes, commenced the reception by greeting the attendees and extending warm wishes for a prosperous New Year.

Following  Gregory Timagenis, A’ Vice President of the Propeller Club, welcomed all and referred to the main objective of the Club, that is the promotion of Maritime Relations, Commerce, Goodwill and Cultural relations between citizens of Greece, the United States and all other countries and referred to the activities of the Propeller Club during 2012. Mr. Timagenis closed his speech by congratulating the students of their academic efforts.

Minister of Shipping, Maritime Affairs and the Aegean, Kostis Moussouroulis, in his speech referred to the importance of its reinforcement of the shipping now days. 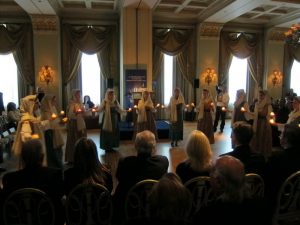 The exquisite dancing group of the American College of Greece performing – photo by P. Nikoulis

His Excellency, Ambassador of the United States in Greece, Daniel Bennett Smith welcomed the audience and referred to the custom of traditional Vassilopitta cutting who along with  Mr. Timagenis, the Board of Governors and Past Presidents of the Propeller Club symbolically cut the New Year Vassilopitta.

H.E. Ambassador of the United States in Greece, Daniel Bennett Smith, presented the Propeller Club scholarship awarded to ‘Fulbright Foundation’ which was received by Mrs. Jenetou Artemis, Executive Director of the Fulbright Foundation as well as to Evanthia Anastopoulou, a graduate Student of American Community Schools. 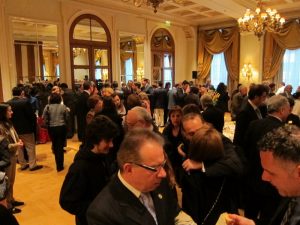 When we say a full house, we mean a full house; net working at its best! – photo by P. Nikoulis

Apostolos Doucas, Regional Vice President of the International Propeller Club, made the announcement of the yearly ‘MARIA P.TSAKOS’ scholarship and invited Adm (Rt.HCG) Efthimios Mitropoulos, Honorary Secretary-general of the IMO  and President of ‘MARIA TSAKOS’ Foundation to present the Scholarship ‘MARIA  P. TSAKOS’ to Despina Mayromati, a graduate student from Livanion Lyceum of Kardamyla, Chios. 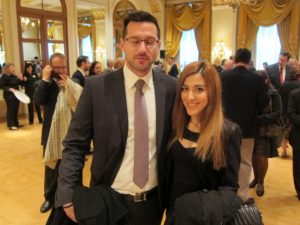 Despina Foros-Tsirozidis, awarded the Propeller Club scholarship to Mr. Dimitrios Agelopoulos, a  graduate student from the American College of Greece.

The ceremony was followed by the exquisite dancing group of the American College of Greece and buffet reception.

Among numerous Propeller Club members, members of the Board of Governors of P.C.,    Dimitris Zorbalas,   Costas Constantinou, Th. Vakrinos, Messrs. Enepekides, Tegopoulos,  and Neslihanidis, Past Presidents of Propeller Club Capt. Besis, and Vassilis Katrantzos, Past Commandant of Hellenic Coast Guard RADM Rentzeperis and many distinguished members and friends.