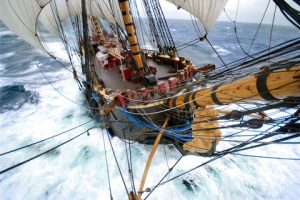 Götheborg will be used as a marketing platform to strengthen Greencarrier’s brand.

It was today, Thursday, February 7, representatives from both companies met to sign a two-year contract with Greencarrier, who becomes the official partner of the Swedish sailing vessel Götheborg and the ship’s European Tour 2013.

Götheborg is a remarkable ship. Built in 2005, she is an 18th century ship replicated without any of the original drawings. Using the tools, building methods and materials of the 18th century, she also fulfils all modern safety requirements. Today she is the largest wooden sailing ship in the world.

With Götheborg as a marketing platform, we will now focus on strengthening our brand further, says Stefan Björk, Chairman and co-owner of Greencarrier:

“The ship is a unique symbol that both amplifies and visualises our motto and mindset ‘Yes, it’s possible!’”

Greencarrier was founded in 2000 and is today one of the largest Nordic privately owned transport groups. The company has over 700 employees in 13 countries, with a focus on Eastern Europe and Asia. Turnover for the Group in 2012: €380m.

“It is with great pleasure that we welcome Greencarrier on board as the new official partner for our vessel. The agreement has given us new wind in our sails and this is the beginning of a new period of sailing expeditions for Götheborg.

“Greencarrier’s commitment means that Götheborg can realise the four-month summer European Tour 2013. This is expected to last between May and September, and the ship will visit several cities where Greencarrier operates.”