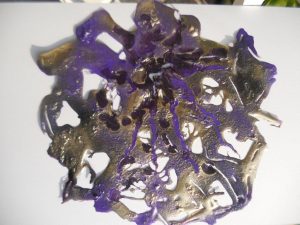 War and destruction, hurricane, fire – artist Mie Fog Baekke often chooses titles that are fierce and dramatic for her three dimensional works that fuse and mould all kinds of materials, but the results are things of beauty. Hers is a kind of ‘incidental art’ for, as she explains, her unusual technique was developed from “happy” accidents in the creative processes. One important ingredient is a lot of patience as she waits for her confections to set.  “It’s all a drying game when you work with glue and resin, ” she told us during her latest show of winning work, at Southfields Gallery, Wimbledon (until February 14, 2013).

Brought up in the Danish countryside, Mie has lived most of her life in London. She began working with collage some time back, and friends who saw her work suggested that she hang it in her then boyfriend’s restaurant, as the place desperately needed new pictures on the walls. He was happy for her to put them up for sale, and as she worked there, “they were rather easy for me to sell. This expanded over the years as more friends, who also owned restaurants, saw my work.” After the relationship ended, she broke off from doing such work. 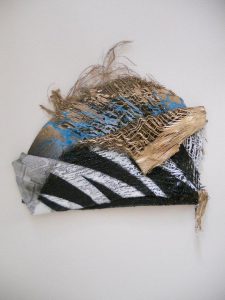 She recalls: “The course was really broad and I could take textile in any direction I wanted. I experimented with textures, wax, resin and chemical reactions, when I mixed it all up…I searched skips, bins, forests and beaches for objects and natural materials that I could incorporate into my art work. It has to be said that some experiments were more successful than others.”

Mie admits: “During my time at South Thames College, I nearly caused a general evacuation, after experimenting indoors with very toxic casting resin. I had absolutely no idea what I was doing or dealing with. Had I read the instructions properly, I would have realised the resin was under no circumstances to be used indoors, except in a proper, industrial, ventilated atmosphere. And the college certainly was not that! The resin was so toxic, that even I realised that I was totally out of my depth. But my passion for working with resin was born, and I kept thinking of all the possibilities of this interesting material.” 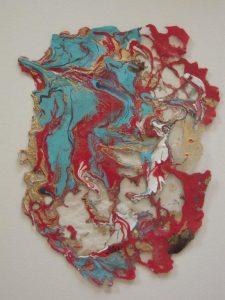 Looking through the window By Mie Fog Baekke

Despite this turning point, the shock of that first encounter with resin meant that she held off for a long time, The day that changed that was 13 years later when she visited an exhibition at Southfields Gallery featuring the work of her friend Andrea Leila Brown. “I saw how Andrea used crystal resin to seal her mosaic artwork. This resin is water based and does not smell, ”  said Mie, adding:“the rest is history as they say!”

The current “history” began when Mie plucked up courage to ask Kuldip Rihal, who runs the gallery, to take a look at her old art work. “I still recall him rolling his eyes and perhaps thinking, not another one of those wannabe artists…but he told me to come along and show him.” 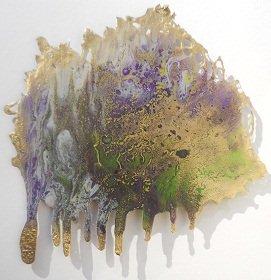 Instead of getting the old work framed, Mie bought a big pot of PVA (polyvinyl acetate) glue and a few bottles of crystal resin, and turned her living room floor into a workshop for the next month. “When I turned up at the gallery with all my new pictures for Kuldip to see, to say he was surprised is a slight understatement! But it can’t have been all that bad, as I have been exhibiting there ever since.”

Mie remains fascinated with textures and loves the vibrant colours seen in the southern parts of Europe and in the East, especially India. She likes a viewer to be captivated and to look through and into the work. Many of her pieces take shape from experimenting with natural materials like coconut husk, seeming to take their natural shape and beauty into a different dimension.

“It’s all a drying game when you work with glue and resin, ” says Mie. “I make initial pictures of glue mixed with acrylic, ink or some kind of emulsion or gloss paint, and then build up the picture. This will take about a week to dry, allowing me to put the finishing touches to the image. At this stage the picture will be soft, like a floppy pancake. 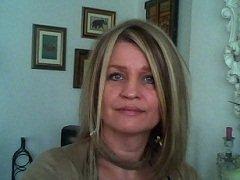 ”I then use the clear resin to harden the work. I normally need to repeat this process as often as five to eight times, depending on how thick the original piece is. If I incorporate other material like tissue paper or coconut husk in the first process, then the resin is used only to seal the surface of the work and to give it a gloss finish. I like experimenting with water based and spirit based paints, and I sometimes incorporate household chemicals and salt, as I like the interesting effects caused when mixed with the paint.”

I was very impressed when I saw Mie’s work last Friday at the Southfields Gallery. Congratulations!