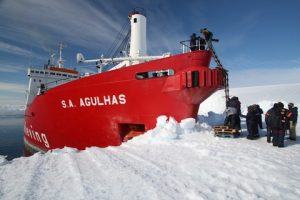 Cape Town, South Africa, 12 February, 2013 – Having just completed its mission with the international Coldest Journey team first ever traverse across the Antarctica, the Agulhas will set sail again back to the icy terrain for another research expedition with the Council for Scientific and Industrial Research (CSIR).

For the next 12 months while the expedition is crossing Antarctica and before the Agulhas, owned by the South African Maritime Safety Authority, is commissioned again to collect the expedition team at the completion of their journey, the ship will engage in further voyages with their complement of young trainees starting on Friday with the CSIR.

The Agulhas is known for its state of the art training and research capabilities and already has multi million rand worth of state-of-the-art equipment of the Southern Oceans Carbon and Climate Observatory programme on board.

The Agulhas supported the Coldest Journey team, headed by Sir Ranulph Fiennes. It docked at the Cape Town harbour this morning, received with a thunderous welcome. On board the ship was the 51 marine cadets from all over Africa who manned the vessel, the remaining members of the Ice Team and its crew.

SAMSA CEO Tseitsi Mokhela said: “What this mission has managed to cement is that the Agulhas has become a sampling platform of international standard, and that it is making a positive and meaningful contribution to climate change research. As a training and research vessel, the science challenges for the Southern Ocean is enormous. Expedition over expedition the Agulhas has proven that she is reliable, and can be counted on.”

He added the role played by the Agulhas constituted a long-term contribution of South African science to the global initiatives on observing how the earth systems were adjusting to global warming.

SAMSA representative Captain Okke Grapow welcomed the crew. “This has been a remarkable experience for our youngsters on board. The work goes on and hopefully more and more young people will realise the huge potential this experience can provide.”

Anton Bowring, co leader of the Coldest Journey said the Ice Team will, by March 21, set up base camp 4000 kilometres into the Antarctica. They can expect temperatures to drop to -70°C or lower during the permanent darkness of the mid-winter months.

Cadet Lungani Simamane from KwaZulu-Natal was excited to be on the journey. “The debut of my career on Agulhas is something that has got me on my toes. I was so delighted to cross four quadrants of the earth within two months on a voyage between Cape Town and London, to get The Coldest Journey Expedition team to Antarctica. My excitement was further elevated by being at Antarctica, where the sun never sets (summer), and being involved on an Ice cargo operation. This experience has opened new options on my career, like being a marine polar explorer. Above all, whatever the outcome of the Expedition in the year 2014, will be something worth remembering for years to come, hence I was part of it.”

Cape Town cadet Shuneen Van Niekerk was amazed at the experience. “I would have never thought I would see this side of the world because not many people get the chance. Being part of this voyage has given me the extra knowledge about ice pilotage and Antarctica itself. Discharging the cargo was challenging at times due to unforeseen weather and ice conditions, which made every day even more exciting.

“It was very cold at times but myself and my fellow cadets pulled through, we are still in one piece. We also had some shore leave as we would call it in normal terms where we went onto the ice shelf and played around with the ice that was the best part of it all, therefore I can see I’ve touched ‘real’ ice and not the once made in the normal fridge. I would like to thank the expedition team, SAMSA, SAMTRA and SMIT.”

Back to their homes now, it will be a well rested time for the crew, but the Agulhas will not rest for too long as it journeys once again this week.