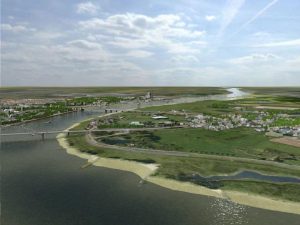 River Waal is to be tamed.

One of most important waterway safety projects in Europe is underway, seeking to regulate the flow of the River Waal, the largest branch of the Rhine. The Waal is a vital inland shipping route, connecting Rotterdam to the Ruhr in Germany, with on average one vessel passing every three minutes. The problem is that at Nijmegen, its course takes one of the narrowest bends in the Dutch river system.

Such a bottleneck represents a major flood hazard to population and property over a wide area, prompting authorities to take action, starting a scheme which includes construction of a 3 km channel alongside the river.

Minister of infrastructure Melanie Schultz van Haegen joined 50 schoolchildren and the mayor of Nijmegen, at the ground-breaking ceremony on January 22 2013.

The Nijmegen project is part of what is known as Room for the River, a series of measures at 30 locations to increase the discharge capacity of the Rhine system, and incidentally producing greater efficiency for commercial shipping.

Room for the River marks a halt to the old strategy of heightening river dykes, which had been seen as a defence against inundation. It is now recognised that higher dykes effectively pour more excess water on to land, which could result in an unparalleled flooding disaster.

Although the Dutch have always feared incursions of the sea, the trend to build homes on floodplains, as in other countries, has increased the danger from swollen rivers.

A consortium of civil engineers known as Combinatie i-Lent and formed by Dura Vermeer Divisie Infra and Ploegam has been awarded the contract for the Euro350m Waal project. The national budget for the whole Room for the River programme amounts to Euro2.3 bn.

The Waal dyke at Lent will be relocated 350 metres inland so that the river bed can be widened. An ancillary channel 150-200 metres wide will be excavated in the river bed. Three new bridges and a new quay will be built as part of the scheme, before the end of 2015.

Although the aim is to give greater protection to the inhabitants of Nijmegen and the neighbouring small town of Lent, Nijmegen city council initially reacted cautiously to the plan to widen the river, as 50 houses had to be demolished. After talks, it was agreed that the scheme would integrate into a city development plan, including the creation of an island in the Waal with a river park for recreational and cultural activities and nature walks.

A new urban district will be developed on the northern bank of the Waal for 30, 000 inhabitants, with a station, sports fields, parks, offices and businesses. This new district, De Waalsprong, will include a quay with moorings for boats and room for housing, and space special events.

Overall, the appearance of Nijmegen is to change dramatically: the river will no longer flow by the city, but through it: “Nijmegen is to embrace the Waal, ” say the planners. In contrast to past decades, when the city turned its back to the river – the river that had given Nijmegen its rationale for so long – the city is now gradually turning to face the river again, according to project manager Pim Nijssen, of Twynstra Gudde Management Consultants.

Room for the River project will reshape the landscape at Nijmegen.

Prime aim of the Room for the River programme is to give the river more room to cope with a discharge capacity of 16, 000 cubic metres of water per second without flooding.

Residents recall anxious times in 1993 and especially 1995, when the dykes only just managed to hold against the force of the Waal and as a precaution, 250, 000 people had to be evacuated from the polders.

In a new approach to flood risk management, the European Union is via what is termed FloodResilienCity is part-financing investments in eight cities. Involved are public authorities in Nijmegen, Bradford, Brussels, Dublin, Leuven, Mainz (where a former harbour is being redeveloped with flood-resistant buildings), Orléans (where the public space by the Loire has been improved) and Paris and two universities. Lead partner is the Netherlands Public Works Department.

The rationale in the Netherlands is that as many as 4m citizens are at risk from floods because the  rivers of the Dutch Delta have been wedged between ever-higher dykes, behind which an increasing number of people are housed. At the same time, the ground behind the dykes is sinking. Rainfall is becoming more persistent, forcing rivers to discharge an excess amount of water.  Flow of the rivers IJssel, Lek and Maas is also to be better controlled.

Among enthusiasts for the programme is Marie-Louise Buckens, commercial manager of the Regional Tourist Board Arnhem/Nijmegen, who says that the development will enhance the region’s attractions including its role as a meetings-incentives-conventions-exhibitions destination. Apart from urban conference venues there are meeting rooms by woodlands and even a meeting centre in an indoor tropical rainforest at the Burgers’ Zoo in Arnhem.

Ms Buckens is also promoting a variety of tours, several starting from the Nijmegen quayside and taking in a rich culture dating back 2, 000 years to Roman settlement, when Nijmegen was the largest city in what was to become the Netherlands. Many battles have been fought in the area, the last during World War II when accidental bombing by Allied Forces killed hundreds of civilians and destroyed much of the centre.

Arnhem and Nijmegen were a flashpoint in September 1944 during Operation Market Garden, the largest airborne operation in history, when American and British paratroops tried to conquer the bridges across the Rhine and Waal, to prepare the way for ground forces. Arnhem eventually proved to be “a bridge too far.”