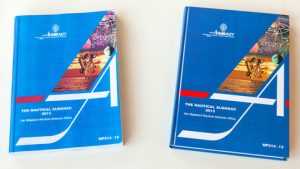 The United Kingdom Hydrographic Office has issued a warning over the dangers posed to the safety of vessels, crews and cargoes by counterfeit nautical charts and publications and has produced a simple guide to help identify genuine Admiralty products.

About Admiralty and the United Kingdom Hydrographic Office (UKHO) 1. UKHO produces a worldwide series of some 3, 300 paper nautical charts, 160 publications under the Admiralty brand and has a growing portfolio of Electronic Navigational Charts (ENCs). These charts are sold globally and used by nearly 70% of international shipping. 2. UKHO, a Government agency owned by the Ministry of Defence, has been charting the worlds oceans for more than 200 years with the primary aim of providing navigational services for the Royal Navy and merchant mariners to save and protect lives at sea. In addition it serves small craft and leisure mariners and provides a range of consultancy services. 3. UKHO is a Trading Fund, which means it has the freedom to trade commercially to generate revenue and cover running costs. 4. UKHO also plays a central role, in support of the Maritime and Coastguard Agency, in discharging the navigation element of the UKs Safety of Life at Sea Treaty obligations for waters of UK national responsibility
0 comment
0
FacebookTwitterLinkedinEmail